November 17, 2007 (NAIROBI) — Kenyan President has called for the implementation of the Comprehensive Peace Agreement (CPA) as a basis of resolving the sticky issues between Sudan’s peace partners the ruling National Congress Party (NCP) and the Sudan Peoples Liberation Movement (SPLM), the Kenya Broadcasting Corporation reported today. 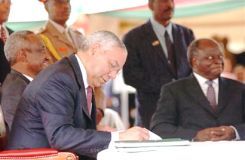 The SPLM pulled out of the government of National Unity on October 11 saying that a 2005 peace deal was not being implemented. The former rebels request the implementation of Abyei report, the north-south border demarcation and the redeployment of northern Sudan army from the oil areas in the south.

Mwai Kibaki, whose country was the lead negotiator in ending a two-decade conflict in South Sudan two years ago, was speaking at State House in Nairobi Saturday when he held talks with the First Vice-President of the Republic and the President of Government of Southern Sudan, Salva Kirr Mayardit.

Saying that Kenya will remain engaged in the Sudanese peace process, President Kibaki noted that he had already contacted President Omar El Bashir on the latest crisis on the implementation of the CPA that occasioned the suspension by the SPLM in the Government of National Unity.

Kibaki welcomed the ongoing peace initiatives on the Sudan saying there was need to re-energize international support especially from those who signed the Comprehensive Peace Agreement.

Salva Kirr, who was on his way home from the US, briefed President Kibaki on the progress made in the implementation of the CPA.

He expressed gratitude over Kenya’s efforts in resolving the South Sudan problem saying Kenya played a pivotal role as Vice Chair of the Assessment and Evaluation Commission, which oversees the implementation of the Comprehensive Peace Agreement.

ADFD to deposit US$250 million into Central Bank of Sudan