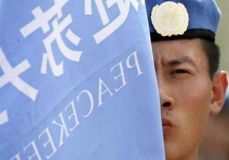 Ministry spokesman Liu Jianchao said the troops would depart Friday from their base in the central province of Henan, but gave no details.

Official media previously said China would send a 315-member unit to Darfur comprising three engineer platoons, one well-digging platoon and one field hospital. The Chinese were to build roads and bridges and dig wells ahead of the arrival of a 26,000-strong African Union-U.N. peacekeeping force likely early next year.

Liu said the unit leaving this week was an advance party, but it wasn’t immediately clear what additional forces China planned to send. A press officer at the Ministry of National Defense said he had no additional information on the Darfur deployment.

The Chinese deployment follows criticism from foreign governments and international human rights groups over Beijing’s reluctance to support international intervention in Darfur. A four-year-old conflict between rebels and government-backed militias in Darfur has killed 200,000 people and left 2.5 million homeless.

Energy-hungry China buys two-thirds of Sudan’s oil output and sells weapons to the Khartoum regime. Critics say Beijing has not used its economic leverage to push Sudan’s government more strongly for peace, and have attempted to shame China into acting by linking the Darfur crisis to next year’s Summer Olympics in the Chinese capital.

Is it World failing Darfur or Sudan’s government?