November 21, 2007 (KHARTOUM) — Police in Sudan have threatened to use force to seize arms from displaced Darfuris in one of the region’s most volatile camps, according to a police notice seen by Reuters on Wednesday. 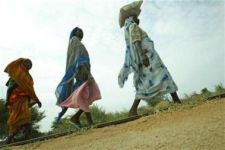 The threat has already started to spread panic among residents of south Darfur’s Kalma camp, said aid groups who added they were worried the seizures might provoke violent clashes or a mass exodus from the settlement.

Some of the camp’s 90,000 residents have already started to build road blocks to obstruct searches of the huge camp outside south Darfur’s capital Nyala, said humanitarian workers, speaking on condition of anonymity.

Sources in the United Nations in Sudan said they were aware of the notice and had been holding meetings to discuss it with the African Union peacekeeping mission in the area.

The notice, which takes the form of a letter from South Darfur’s police headquarters to the African Union south Darfur sector commander, has been widely distributed in the camp.

The document gave Kalma residents three days from Wednesday to hand in weapons kept inside the camp.

It added army personnel would remove the weapons from Nov. 24 to Nov. 30, without going into details about how the removals would take place.

The notice said police would “seize all unsubmitted weapons by force after the expiration of the date given”, leaving the exact deadline ambiguous.

The notice, signed by Nyala’s “manager of police” Colonel Omer Mohmed Ali Mohmed, said officers were taking the action to ensure the security of displaced people in the camp.

It added: “The information from AMIS (The African Union Mission in Sudan) and other security agencies indicate that there are weapons among Kalma IDPs (internally displaced people), thus increasing criminal activities and general insecurity.”

No one from AMIS or South Sudan’s police was immediately available for comment.

Aid workers said they had had significant difficulties in getting onto Kalma over the past two weeks. On several days recently, their vehicles were turned away at government check points.

“People are very worried about what is going to happen in a few days time,” said a humanitarian worker. “It is quite tense.”

The worker said other people working in the camps had seen road blocks erected near entrances and exists. “They are trying to stop the soldiers coming in.”

Aid workers said they were also worried the clampdown was part of a wider plan to close down Kalma and split up its population. Kalma is one of the largest and most volatile camps in the region.

More than 2.5 million Darfuris have been driven from their homes to take shelter in camps like Kalma by more than four years of violence, say international experts. Sudan blames the western media for exaggerating the conflict.