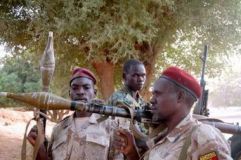 Government forces and rebels clashed near Abou Goulem Monday following the collapse of a truce. The army said it had killed hundreds of rebels. The Union of Forces for Democracy and Development said its fighters had killed 200 troops.

The hostilities followed the collapse of a preliminary peace accord signed between the government and four rebel groups in Syrte, Libya on October 25. Sudan and Libya had sponsored the talks.

“It (Sudan) made promises related to the deal about the containment and disarmament of the rebels. Unfortunately it didn’t want to respect its promises,” Chaibo said.

“It armed them (the rebels), it drove them out” of its territory, he added, speaking in Abeche, the main town in eastern Chad.

As Chad sent more troops to the region including vehicles mounted with machineguns, bodies were still strewn amid the wreckage left at the scene of the fighting near Abou Goulem, 90 kilometers to the east.

Villagers dug the last of the graves at the battleground, still scattered with spent cartridges, just off the road leading to the border with Sudan.

Officers said the 20 bodies in military uniform were UFDD rebels. Nearby were 32 burnt-out vehicles, most of which bore rebel markings. Officers showed journalists another 20 UFDD-marked vehicles, which they said they had captured.

Dozens of cases of ammunition marked Sudan and several weapons, some of them still in their packaging, were also displayed.

In Abeche, the intelligence chief said the rebels had fled the battlefield and headed for the border with Sudan, 60 kilometers to the east.

Government soldiers were still searching the area and meeting “small pockets of resistance”, he added.