December 2, 2007 (N’DJAMENA) — The Chadian army faced battles on two fronts in the east of the country against rebels who said Sunday they would step up their attacks on government forces. 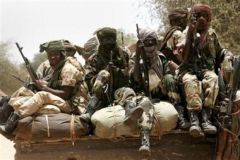 The Union of Forces for Democracy and Development (UFDD) and the Rally of Forces for Change (RFC) said they are now coordinating their battle with the army in areas near Sudan’s troubled Darfur region.

The UFDD has fought three major battles with the army since Monday, after a month old peace accord collapsed.

The situation was calm on Sunday but UFDD secretary general Abakar Tollimi told AFP: “We are currently regrouping. After three very intense battles our forces have to be reorganised.”

He said his group, which is based around Hadjer Marfain, about 150 kilometres (90 miles) northwest of Abeche, was in contact with the RFC.

“We are not entering into zones where the RFC are, in order to coordinate ourselves,” he told AFP by satellite phone.

RFC spokesman Id Moura Maide said: “We are coordinating, but each one is fighting in his own area.”

The RFC joined the anti-government fight after it was twice bombed by Chadian government aircraft north of Abeche on Saturday.

The government accused the RFC of wanting to attack N’Djamena. It said Saturday that RFC rebels were trying to regain their base in Sudan.

On Friday, government troops also clashes with another rebel group, the United Front for Change (FUC). On Saturday, President Idriss Deby Itno sacked the group’s leader Mahamat Nour Abdelkerim as defence minister. He has now taken refuge in the Libyan embassy in N’Djamena.

International worries over the conflict has heightened since the UFDD threatened to attack the French army or any other foreign forces deployed in a planned 3,500-strong EU peacekeeping mission to the region.

Over 80 heads of cattle stolen in S. Sudan’s Jonglei state