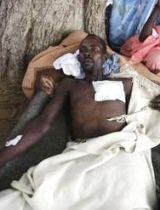 Bystanders caught up in clashes between the warring parties have also been tortured, raped and suffered widespread looting in the western region, according to the U.N. experts on Darfur.

Their 106-page report calls on the Khartoum government to protect civilians in Darfur and investigate all crimes. It is to be presented next week to the U.N. Human Rights Council.

“According to United Nations sources, from June 20 to mid-November 2007, at least 15 land and air attacks were made on civilian centres in all three Darfur states by the forces of the government, affiliated militia and the Minni Minawi faction of the Sudanese Liberation Army,” the report said.

A Reuters tally of casualty figures contained in the report indicated that at least 300 people were killed in about 20 land and air attacks documented by the U.N. in the past six months.

U.N. officials pointed out they had been unable to document all the incidents due to restrictions on movement, logistical constraints and insecurity in Darfur.

“The information in the group of experts’ report was meant to be illustrative only and not to provide a comprehensive picture of violations,” Lyal Sunga, the Geneva-based coordinator of the U.N. experts’ group, told Reuters.

In the latest incident, the South Darfur town of Muhajiriya was attacked on October 8 by militiamen with apparent army support, resulting in at least 30 civilian deaths and the torching of up to 100 houses, according to the U.N. report.

Attacks by militias on camels, horses and all-terrain vehicles with mounted machine guns in the Bulbul area of South Darfur in late July and early August caused more than 135 deaths, it said.

The U.N. Security Council is seeking Sudan’s compliance in the deployment of a U.N.-African Union peacekeeping force in Darfur, to which Khartoum has agreed in principle. Sudan has blamed the United Nations for delays in the deployment.

The 15-member body decided unanimously in July to send peacekeepers to help stem the violence in Darfur, where some 200,000 people have died and 2.5 million have been driven from their homes in 4-1/2 years of fighting.

A group of veteran politicians formed by Nelson Mandela urged the international community to supply equipment needed to allow the joint U.N-African Union force to deploy to Darfur.

“Darfuris are eager and in some cases desperate for the arrival of the UNAMID force,” the report from the so-called Elders said of a planned joint U.N./AU mission to the region. “If anything, their expectations are dangerously high.”

“We need a hybrid U.N.-AU force in Darfur with sufficient equipment and support. We need it now.”

The winner of the European Union’s top human rights prize demanded the bloc took a more active role in resolving the Darfur crisis and said it could not stand by during “genocide”.

“Europe has always been talking tough about the policies of the government of Sudan, but we don’t see acts,” Sudanese lawyer Salih Mahmoud Osman told a news briefing in Brussels.

“Europe is confused, it is divided on the issue of Darfur. The EU hasn’t any unified political will.”

Darfur betrayed: The African summit in Khartoum; a symbol of failure