December 5, 2007 (ADDIS ABABA) – A high level delegation from the Sudan People’s Liberation Movement (SPLM) met today in the Ethiopian capital with the US Secretary of State to discuss the implementation of the Comprehensive Peace Agreement (CPA). 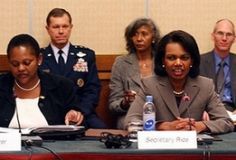 SPLM Secretary General, Pagan Amum, on Wednesday met with U.S. Secretary of State Condoleezza Rice, to discuss the pending issues in the implementation of the CPA, the meeting was attended by foreign ministers of IGAD and Great Lakes.

The ruling National Congress Party skipped the meeting expressing its rejection of foreign intervention in the resolution of the current crisis over the implementation of the CPA. Sudanese government dominant party says the peace deal encompasses appropriate mechanisms to resolve divergences between parties.

Pagan told the official SUNA, that the meeting discussed obstacles and challenges facing the implementation of the peace deal.

Rice had said she wanted to try to bolster the 2005 peace agreement that ended a long-running north-south civil war. “That is really an agreement that we cannot afford to let unravel,” Rice said.

Pagan met also with The US Assistant Secretary of State for African Affairs, Jendayi Frazer.

In a statement distributed by the southern Sudan ruling party, the SPLM underlined that the protocol of Abyei, the redeployment of troops, lack of transparency in the management of oil revenue and the demarcation of north-south border are the main disputed issues.

Pagan said that the international peace sponsors (the USA, the UK, Italy and Norway) of the CPA are expected to hold a meeting in Sudan before the 9 January 2008 to discuss the ill implementation of peace deal.

Last October, the SPLM suspended its participation in the government of national unity accusing its peace partner the NCP of dragging foot on the implementation of the CPA.

Secretary of State Condoleezza Rice was today in Addis Ababa, where the African Union is headquartered, to meet with African leaders about some of the continent’s worst conflicts, but the absence of Sudanese officials and the Somali president’s illness undercut her attempts at diplomacy.

Besides the row over the CPA implementation, the US Secretary of State wanted to tackle Darfur crisis with the Sudanese ruling party. A request for a meeting in Addis Ababa had been sent to Khartoum which skipped the reunion.

Relations between Washington and Khartoum have been strained, with American leaders accusing the Sudanese government of atrocities in Darfur, and Khartoum bristling at Western pressure to allow international peacekeepers in Darfur. But Washington also sees Khartoum as an ally in the war on terror.

Earlier, Rice said she wanted to focus on overcoming logistical hurdles holding up a joint UN-African Union peacekeeping force for Darfur, a vast region ravished by years of conflict.

More than 200,000 people have died and 2.5 million have been displaced since February 2003 when ethnic African rebels in Darfur took up arms against the Arab-dominated central government, accusing it of neglect.

Darfur – Stop the killing, or pay the price