December 5, 2007 (KHARTOUM) — The Sudanese government denied on Wednesday the accusation of its interference in the internal affairs in Chad, reiterating its keenness for calm in the neighboring country. 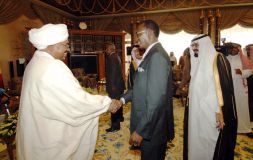 “What is going on in Chad is an internal affair that Sudan has nothing to do with,” the Sudanese Foreign Ministry said in a statement.

It noted that “Sudan has been working to calm down the situations in Chad based on its policy of good-neighborliness, respect of sovereignty of states and nonintervention in the affairs of others.”

The statement also reaffirmed Sudan’s keenness to abide by and comply with the security agreements signed with Chad.

It said the Sudanese has effectively mediated between the Chadian government and the opposition movements in the negotiations held in Libya, during which culminated by signing a peace agreement on Oct. 25.

Praising the efforts of Libya in bringing the Chadians together towards the realization of national accord, the statement urged the Chadian government and the opposition movements to respect the agreement signed in Libya and to work to ease the situations towards lasting peace in Chad.

Last week, Chadian Prime Minister Nouradine Delwa Kassire Coumakoye accused Sudan of backing anti-government rebels to try to block the planned deployment of an EU peacekeeping force in the east of the country.

Coumakoye told a press conference that the government forces had found Sudanese-supplied arms, munitions, vehicles and uniforms among the rebel Union of Forces for Democracy and Development ( UFDD) fighters they had killed or captured.