December 6, 2007 (KHARTOUM) — Sudan has announced today the closure of border with Chad following the escalation of fighting between the Chadian army and the rebels near the south-eastern Sudanese border. 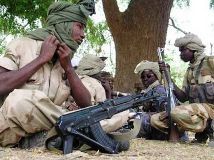 Sudanese state minister at the Ministry of Foreign Affairs, Al-Samani al-Wasila, said today that Sudanese president reiterated his support to the government of the Chadian president Idriss Deby. He further said that the president directed to close the joint border in order to prevent the armed opposition from entering Sudan.

He also reaffirmed Sudan’s commitment to reconciliation and security agreements signed with Chad.

The Sudanese official made these statements following a meeting between al-Bashir and Adam Younis, the Chadian minister of infrastructure who carried a message to the Sudanese president over the current situation in the country.

The Chadian government and rebels confirmed on Thursday clashes near the south-eastern border with Sudan and the Central African Republic.

“Army troops came across groups of rebels near Tissi on Wednesday and fought them off,” said a Chadian military source in the capital Ndjamena.

A spokesman for the rebel Popular Front for National Rebirth confirmed the clashes which he said continued on Thursday morning and claimed that the insurgents held the upper hand over the government forces.

The Rally of Forces for Change and the Union of Forces for Democracy and Development, the two main rebel groups in Chad, have said recently they are coordinating their battle against President Idriss Deby Itno.

The Chadian army fought heavy battles against RFC forces Tuesday in the east of the country near the border with Sudan’s troubled Darfur region, prompting warnings from the U.N. of an impending refugee crisis.

The UFDD has fought three major battles with the army, also in eastern Chad, in the past 10 days.

ARREST OF THE SULTAN OF DAR TAMA

A rights group said earlier Thursday that the Chadian authorities had sacked and arrested two local officials following clashes last month between the army and a fourth rebel group, the United Front for Change, or FUC.

The sultan of the Dar Tama region and the prefect of the town of Guereda were sacked on Nov. 30 following the clashes, said Massalbaye Tenebaye, head of the Chadian Human Rights League.

The prefect is a member of the FUC and the sultan is accused of sympathizing with the rebels, who along with two other groups have been fighting the army in recent weeks.

“They were kidnapped in an extrajudicial manner on November 30 by the National Security Agency,” Tenebaye said.

“According to some sources they were taken to Abeche (the main town in eastern Chad), then to Ndjamena but were held in secret,” he said, adding that no official reason had been given for their arrest.

A top Chadian official said that the two men had been stripped of their functions and had been “arrested and taken to Abeche;” the AFP reported.

He gave no reason for the move.

Dar Tama was the scene in October of deadly inter-ethnic clashes between the Tama and Zaghawa peoples which prompted the authorities to impose a state of emergency in northern and eastern Chad, which remains in place.

The FUC is made up mainly of Tamas and their relations remain strained with the Zaghawas, the ethnic group of President Deby.

Better to fight for justice than self-determination in Sudan’s Nuba Mountains: Umma Party