December 11, 2007 (KHARTOUM) — Darfur rebels said they attacked a Chinese-run oil field in Sudan on Tuesday and vowed to launch more assaults on other installations. 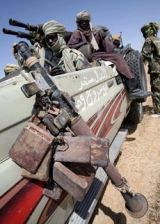 No one from Sudan’s armed forces or the Ministry of Energy was immediately available for comment on rebel claims of an attack on the field in Sudan’s Kordofan region.

But in October Justice and Equality Movement (JEM) rebels seized five hostages when they attacked Kordofan’s Defra oil field in an assault they said was meant to send China a message to stop supporting the Sudanese government through oil revenues.

Khartoum is very sensitive about reports that might damage its oil industry.

“We defeated 1,200 Sudan Army soldiers who were protecting the field. We now have control of the field.”

Ibrahim said a number of Sudan Army troops had died in the hour-long attack, along with one of his own senior commanders. Oil workers fled the site during the attack, he said, adding he had taken no prisoners.

“This is still going on,” said Ibrahim. “We will be launching more attacks in the next three days — maybe within hours, maybe within days.”

Ibrahim said Tuesday’s attack was on a field in Kordofan’s Heglig area, run by the Great Wall Oil Company of China.

An oil analyst, speaking on conditions of anonymity, said there was no such operator working in Sudan — but that it could be the name of a sub-contractor.

The Donors and Darfur