December 11, 2007 (BEIJING) — China on Wednesday called for the safety of its citizens in Sudan to be guaranteed a day after rebels there attacked an oilfield being run by a Chinese company for the second time in as many months. 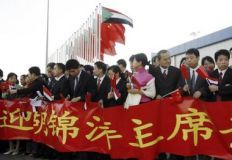 “Any threats or attacks on Chinese organizations or people in Sudan are unacceptable,” the foreign ministry said in a statement on the latest attack. “The safety of Chinese personnel in Sudan must be effectively guaranteed.”

Darfur rebels said Tuesday that they had seized control of the Chinese-run Rahaw oilfield in Sudan, killing and wounding several members of a government protection force there.

The Sudanese military acknowledged that about 20 rebels attacked an army camp near an oil facility, but insisted that the attack had been repelled.

China is Sudan’s top oil buyer and weapons provider in a relationship that has drawn much criticism in the West, as well as opposition from Darfur rebels.

“Our attack is another attempt at telling Chinese companies to leave the country,” Justice and Equality Movement commander Abdel Aziz Nur al-Ashr said by telephone.

Ashr vowed that attacks on the oil industry of the Kordofan region east of Darfur would continue until China ended its operations in Sudan.

“We have neutralized the site’s protection force…and we have destroyed their installations which has halted production,” Ashr said. “We have seized vehicles, artillery and we totally control the facility.”

The Rahaw facility run by China’s Great Wall company produces 35,000 barrels a day and is located northwest of the Hajlil field, which JEM attacked on Oct. 23, according to Ashr.

China’s foreign ministry insisted that the Asian giant was in Sudan to help advance development of the African nation.

“Chinese companies in Sudan are actively developing win-win projects in order to contribute to economic and social development and the improvement of the people’s lives,” the ministry said.