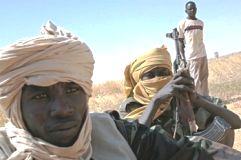 In accordance with a ceasefire agreement brokered by the African Union between Sudanese government and the two main rebel groups in 2004, there are two representatives of JEM and the SLA. The commission is based El-Fasher and the delegates are under the protection of the AU.

“Colonel Mohamed was on an official helicopter trip from El-Fashir to Kulbus with an AU Cease Fire Commission (CFC) team.” JEM indicated. It also said that their member at the commission was arrested at Kubus airstrip while he was in a mission with the AU staff.

“Colonel Mohamed was wearing an AU insignia and was in possessing of an AU identity card. The where about of Colonel Mohamed and his safety are not known.”

The rebel group said it holds the AU mission in Sudan “responsible for protection of its representatives” Further it warned Khartoum that “It will not hesitate to take action if his safety is compromised.”

JEM carried out since the last month several attacks against oil fields in the country. Also the rebel group said on Sunday they had inflicted a crushing defeat on Sudan’s army in West Darfur in an overnight battle during which they captured 29 soldiers, 32 vehicles and heavy weaponry.