January 7, 2008 (NDJAMENA) — Chadian air force planes on Sunday evening attacked a Chadian rebel base across the border in the Darfur region of Sudan, military and security sources said, while Khartoum accused Chad of bombing civilians. 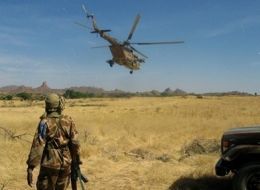 The raid was carried out over West Darfur around 0400 local time by two helicopters, an Mi-17 and an Mi-24, with a Pilatus light aircraft, the military and security officials in Ndjamena said.

But a Chadian rebel spokesman contacted by AFP said the aircraft couldn’t have hit rebels since “our troops are all in Chad.”

The official sources confirmed a report from Khartoum that a similar attack was carried out Sunday in the same Darfur region against rebels opposed to Chad’s President Idriss Deby Itno. Several rebel bases lie south of El-Geneina, the capital of West Darfur, about 200 kilometers across the desert from Abeche, the main town in eastern Chad, but it wasn’t clear which had been targeted.

“Three Antonov planes attacked positions southwest of Geneina in the early hours of Sunday, killing three civilians and wounding four others,” he said.

A spokesman for Chad’s latest rebel alliance formed in mid-December, Abderaman Koulamallah, said Monday’s attack couldn’t have affected the movement since “our troops are all on the Chadian side of the border.”

However, the head of one group in the Alliance, the Union of Forces for Democracy and Development – Fundamental, acknowledged his base in Sudan was hit Sunday.

“I was bombed on Dec. 28 and yesterday (Sunday) by Chadian aircraft inside Sudan,” Abdelwahid Aboud Makaye said, reached by satellite telephone from Libreville.

“Our headquarters are on the Sudanese side; we sustained a few wounded,” he said, adding there were no raids on his own positions Monday.

The attack followed a threat Saturday by Deby to pursue and strike Chadian rebels inside neighboring Sudan and repeated charges Khartoum was trying to destabilize his country.

Rebels and government forces clashed violently in eastern Chad between Nov. 26 and Dec. 4, scuttling October peace accords signed in Libya. The rebels have since reorganized and allegedly have support from Khartoum, with some groups acknowledging the majority of their forces were on the Sudanese side of the border, already in the grip of ethnic conflict.

Relations between Sudan and Chad have turned from bad to worse, with Deby again accusing Khartoum of having a “destabilization plan” against his already volatile country.

Deby, who has backing from French troops permanently based in the central African nation, initially came to power in 1990 in a rebellion launched from eastern Chad and has faced successive bouts of insurgency.

The army has been strengthened by weaponry bought with oil revenues, but rebel leaders in November and December expressed disquiet at plans to deploy a French-led European peacekeeping force in Chad to protect hundreds of thousands of Darfur refugees and internally displaced Chadians.

French Defense Minister Herve Morin, in Chad for the New Year, said he hoped the 3,500 men could start deploying this month, after stating in December their presence “does not concern the military actions carried out by rebels against the Chadian armed forces.”

The rebel UFDD has threatened to shoot down helicopters on the grounds “all European units on our territory are enemies because they came to defend the dictator (Chadian President) Idriss Deby”.

Sudan accuses Chad of violation and aggression against its territories