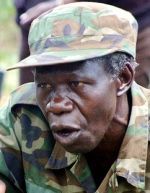 “I was officially informed by Joseph Kony that Vincent Otti is dead,” south Sudan Vice President Riek Machar told reporters in Juba, south Sudan’s capital. Machar is mediating talks in Juba between the rebels and the Ugandan government.

Numerous LRA deserters have said that Kony, whose 20-year rebellion killed tens of thousands of people and uprooted 2 million before a ceasefire last year, shot dead his number two, accusing him of spying.

No official source had so far commented on his fate.

Otti, regarded as the brains behind the group in contrast to the volatile Kony, was a prime mover behind the LRA joining peace talks that began last year in Juba.