January 26, 2008 (KHARTOUM) — A group of Sudanese released from the U.S. prison in Guantanamo Bay demanded cash payouts and an apology from the United States on Saturday, for mental and physical torture suffered during years spent in jail there. 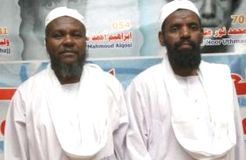 “We have asked for compensation and an apology,” aid worker Adil Hassan Hamad told a conference in Khartoum, which was organised by local rights groups to demand the release of seven Sudanese still held at Guantanamo Bay.

Hamad, freed just over one month ago, wore orange overalls like those worn by detainees in the U.S. prison camp. He was working with refugees when arrested in Pakistan in 2002 and taken to Afghanistan and then the U.S. camp in Cuba.

He said his U.S. lawyer would seek compensation in the U.S. courts. One of Hamad’s daughters died during his detention because his wife could not afford medical treatment. Two other inmates were also seeking compensation, he said.

Washington has designated Guantanamo prisoners, who were mainly seized in Afghanistan after the 2001 U.S. invasion, as “enemy combatants” and denied them prisoner-of-war status that would guarantee them certain rights under international law.

Many attending the Khartoum conference broke down in tears when addressed by the wife of al Jazeera journalist Sami al-Hajj, the most high-profile of the around 300 detainees still in the prison on the Caribbean island.

He has been on hunger strike for 400 days but is force fed twice a day in a manner his lawyer told the conference was tantamount to torture.

His wife Aygol Ismailova, who is from Azerbaijan, wept as she told the gathering how Hajj has been urinating blood and was suffering from other health problems.

“His son Mohamed always asks me: ‘Where is my father, who took him? What is prison? What do they do there?’ And I don’t know how to answer him,” Ismailova told Reuters.

“Do people know that I have no way to contact my husband other than letters that reach him late and are censored? For more than six years I’ve not heard his voice, not seen him,” she said. “This is torture.”

All Guantanamo detainees deserved compensation and an apology, she said, adding that Sudanese government officials had told her they hoped Hajj would be released by the end of March.

Hamad and another former Guantanamo detainee set up mock prison cells to show those attending the conference the cramped conditions in which they were held.

“Often they’d leave prisoners tied up in very, very cold rooms and refuse to allow them to go to the bathroom so they’d wet themselves.”

“I was beaten, made to stand for long periods of time, deprived of sleep for three nights,” Hamad said of his treatment by the U.S. army in Afghanistan before he was moved to Cuba.

October 22, 2021 (WASHINGTON) - The U.S. State Department on Friday called on Sudanese partners to adhere to the transition's benchmarks and cooperate together...

US wary of Sudan expulsion of diplomats