February 10, 2008 (N’DJAMENA) — Chad’s rebels said on Sunday they had occupied an eastern town after clashes with the national army and Sudanese rebels supporting Chadian president and reiterated they were still in control of the centre of the landlocked country. 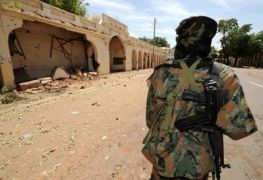 Ali Ordjo Hemchi, a spokesman for the coalition of three rebel groups which launched a failed assault on N’Djamena a week ago, said the rebels had taken the town of Am Timan after a brief battle.

Am Timan, some 600 km (373 miles) east of the Chadian capital, is located at the junction of Sudan, Chad and Central African Republic borders.

“One of our columns has liberated Am Timan in the southeast of Chad. We have taken a significant quantity of arms and ammunition,” Hemchi told Reuters by satellite phone.

“There was not much resistance,” he said, adding the fighting did not last more than half an hour.

Hemchi said “Sudanese mercenaries” had been fighting alongside Chadian soldiers and said French warplanes flew over the rebel positions after Am Timan had fallen, but did not open fire.

The insurgents say they withdrew to regroup.

Hemchi said there were a total of seven rebel columns. He said the rebels were now surrounding the central towns of Mongo and Bitkine, which they claimed to have taken on Saturday, but that there had been no fresh fighting in either location.

However according to the AFP, the rebels, who were attempting to overthrow President Idriss Deby Itno, abandoned their fallback position in central Chad over the weekend and headed south with the army in pursuit, military officials said.

“About 150 to 200 rebel vehicles left Mongo on Saturday and were heading in the direction of Am Timan, in the southern zone of the three borders,” one source told the Agence France Press.

The Chadian authorities have relaxed a dusk-to-dawn curfew imposed on the capital on Thursday so that it now runs from midnight to 6:00 in the morning. But the city remains tense, with soldiers constantly patrolling in machinegun-mounted pick-up trucks.

(Information for this report provided by AFP and Reuters)

Chad to file complaint before UN Security Council against Sudan