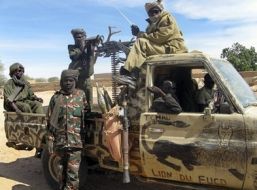 The rebels could head back into Sudan’s strife-wracked Darfur region or back via the CAR, unless they chose to remain in the sparsely populated border area.

But a rebel spokesperson Abderaman Koulamallah said that they want to stretch the government troops out as far as possible from their bases.

“The triple frontier zone wouldn’t be bad for them, because it’s discreet and they could get new supplies from Sudan,” Perie told journalists.

The Chadian army, equipped with the pick-up trucks best suited to the rugged semi-desert territory, was on the move about 100 kilometres (60 miles) behind the rebels but failed to hit them. They tripartite rebel alliance reached on Sunday the lawless Am Timam, in the southeast.

Also they Chadian army helicopters Mi-24 and Mi-27 fired on the rebel column but didn’t reach them.

Following the defection of the two colons troops to the rebels since the battle of Massaguet about 50 kilometres (30 miles) northeast of the capital on the First of February, the number of Zaghawas among the rebels is more important than within the loyal troops.

According to the different reports the rebels remain a source of wary for the Chadian president because contrary to 2006 attack their forces are intact while troops loyal to president Deby are obviously affected by the attack.

Chad accuses the Sudanese government of backing the rebels, who managed to form an alliance of three groups before the first such offensive on Ndjamena since April 2006. But Khartoum denies that and accuses N’djamena of supporting Darfur rebels.