February 15, 2008 (EL KADADA, Sudan) — French archaeologists in Sudan say they have uncovered the oldest proof of human sacrifice in Africa, hailing the discovery as the biggest Neolithic find on the continent for years. 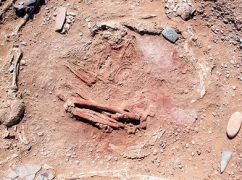 The tomb of a 5,500-year-old man surrounded by three sacrificed humans, two dogs and exquisite ceramics were exhumed north of Khartoum by Neolithic expert Jacques Reinhold and his 66-year-old Austrian wife.

“This is the oldest proof of human sacrifice in Sudan, in Egypt, in Africa,” Reinhold told reporters next to the remains in El Kadada village, a three-hour drive north of the Sudanese capital.

“I don’t know of another example in Africa at this level… We don’t have anything as strong in other excavations in other countries,” said Reinhold, as villagers in traditional white robes carefully scrapped earth into buckets.

The archaeologist, who has led the excavation for several months, described the tomb as the most important Neolithic find in Africa since the 1990s.

That period — which Reinhold calls the first global revolution — marks the period when man evolved from hunter gatherers into farmers and producers, forever changing the structure of human society.

He says the find is nearly 1,000 years older what many consider Sudan’s most spectacular discoveries of human sacrifice — scores of bodies buried together.

Close to the Nile and highly fertile, the El Kadada area north of the modern town of Shendi would have been highly favourable for Neolithic settlers.

Reinhold and wife Ulla met in Khartoum and lived in Sudan for 25 years where he was director of the Section Francaise de la Direction des Antiquities.

The French team said that urns, materials used to grind wheat into flour, beeds and bracelets also uncovered at the site will be donated to the National Museum in Khartoum.