February 26, 2008 (TOKYO) – Japanese government is considering the dispatch of peacekeepers from its national army Self-Defense Forces (SDF) to participate in U.N. peacekeeping operations in South Sudan as early as from June. 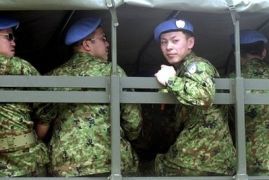 “Sudan is one among a number of candidate locations that deserve consideration” for the deployment of personnel for U.N. peacekeeping operations, Foreign Minister Masahiko Komura said in the morning, without elaborating.

With more than 70 countries, including China, South Korea, India and other Asian nations, currently participating in the U.N. Mission in Sudan, Japan is scrambling to catch up in order to promote its leadership as president of the G-8 this year and to score marks for its bid for a permanent seat on the U.N. Security Council.

UNMIS, involving around 10,000 personnel, is one of the largest U.N. peacekeeping operations.

But Japan’s envisioned deployment is likely to be in southern Sudan, as the minister said it is unlikely that the mission being considered would deal with Darfur, the western region about which serious humanitarian concerns continue to be raised.

Komura stressed that the government ministries involved have not yet entered “official discussions” but are exchanging views and are at a “preparatory” stage.

The government is currently considering a plan to send four SDF members to the U.N. Mission in Sudan headquarters in the Sudanese capital of Khartoum. They would take up responsibilities such as liaison and security analysis, the sources said.

After grasping the situation in southern Sudan, Japan will consider whether to dispatch a Ground Self-Defense Force team to engage in activities such as demining and road construction.

Despite the government’s desire to project a greater global role for Japan, overseas deployment of the Self-Defense Forces is a sensitive issue due to restrictions under the country’s war-renouncing Constitution. Under the current interpretation, Japanese troops cannot be sent to combat zones.

The sources said the government has concluded that Japan can take part in the U.N. mission as the circumstances in southern Sudan, including a cease-fire among the parties concerned, satisfy the five principles for deployment.