13000 Sudanese flee to Chad this month

February 29, 2008 (GENEVA) – The UN refugee agency said today that more than 13,000 Sudanese have fled to a remote area of Chad following the new wave of attacks by the Sudanese army in West Darfur . 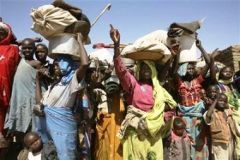 The UN High Commissioner for Refugees (UNHCR) estimated that just this week an additional 3,000 refugees arrived in eastern Chad’s volatile Birak area, where an assistance mission was cancelled yesterday after armed men on horseback were spotted, along with black smoke rising from a burning village.

“The insecurity and close proximity to the Sudanese border mean UNHCR cannot establish a camp in the Birak area, but we are trying to provide emergency assistance when our teams can get there,” UNHCR spokesman Ron Redmond said in Geneva.

The refugees agency said still awaiting approval from the Government of Chad to move the refugees to existing camps that already house 240,000 people uprooted by the five-year conflict in Darfur, in which the Sudanese Government and militias are fighting rebel factions and in which over 200,000 people, mainly non-combatants, have died.

A UNHCR team which reached the Birak area earlier in the week reported that the new arrivals had come there because of repeated militia assaults on the Jebel Moun region of West Darfur.

Meanwhile, the Deputy Special Representative for Sudan, Ameerah Haq, visited Sileah in West Darfur yesterday as part of an inter-agency assessment mission and found the town – which normally has a population of 20,000 – almost empty.

Only around 300 people remained, mostly elderly citizens who could not flee. The town was attacked on 8 February, in the beginning of the current onslaught.

On anniversary of genocide convention, US approaches moment of truth

In Sudan, the daily battle to provide aid