March 2, 2008 (JUBA) – The Ugandan government and the rebel Lord’s Resistance Army/Movement (LRA/M) will sign the Final Peace Agreement before the end of this month, said the Vice President of the Government of Southern Sudan and Chief Mediator of the Ugandan peace talks, Dr. Riek Machar Teny-Dhurgon. 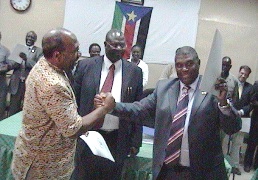 The two parties signed the last agreement on Friday in Juba, Southern Sudan, on Disarmament, Demobilization and Reintegration (DDR) of LRA former combatants in a series of agreements signed since August 2006.

Machar told the two delegations to reconvene in Juba on March 12, to put some final touches on implementation schedule of the Final Peace Agreement expected to be signed in Juba by both President Yoweri Museveni of the Republic of Uganda and Joseph Kony of LRA/M.

He said he would travel to Rikwangba Assembly Area at Sudan-Congo border accompanied by Ugandan religious leaders to consult with Joseph Kony to come to Juba for the signing.

Dr. Machar also acknowledged that he needed some time to compile into one document all the agreements reached by the parties and to give time to his President, Salva Kiir Mayardit, to process the extension of invitations to African heads of states and other dignitaries to come to Juba and attend the signing ceremony of the Final Peace Agreement.

The two parties on Friday also signed an agreement on implementation and monitoring mechanisms of all the agreements they reached so far. The mechanisms call for a transitional period of one month during which the Parties shall prepare for implementation of the Final Peace Agreement. The Transitional Period shall commence immediately upon the signing of the Final Peace Agreement.

This Oversight Forum shall be chaired by the Chief Mediator, Dr. Riek Machar while the Special Envoy of the United Nations Secretary General for LRA affected areas and former President of Mozambique, Joaquim Chissano shall be the Spokesman of the Forum.

The functions of the Joint Liaison Group shall include monitoring the implementation of the Final Peace Agreement on the ground in accordance with the Implementation Schedule adopted by the parties; making recommendations to the government of Uganda or other implementing agencies on any aspect of the implementation of the Final Peace Agreement; furnishing the Oversight Forum with regular briefings; and making recommendations to the Chief Mediator concerning the holding of a stakeholders’ conference.

The agreement also stipulates that the JLG shall propose the names of persons from the conflict affected areas to be considered for political and diplomatic appointments in the government of Uganda and shall ensure that all departments implementing national programmes relevant to the Final Peace Agreement cooperate with the work of the JLG and submit regular reports to the Group.

There shall also be established a ‘Ceasefire Monitoring Team (CMT)’ to monitor the implementation of the agreement on disarmament, demobilization and reintegration of the LRA combatants who are not qualified or willing to join the Ugandan national army or other security agencies.

The Security Arrangement agreement stipulates that the leader of the CMT and deputy leader shall be senior officers from the Sudan People’s Liberation Army (SPLA) with membership of five from each of the two parties, the African Union observer countries and the United Nations.

The agreement further stipulates that the Oversight Forum (chaired by the Chief Mediator) shall be responsible for addressing any disputes arising between the two parties and in the work of the JLG. The Forum shall also promote confidence-building measures between the parties and the parties undertake to cooperate with these measures.

As an obligation of the Government of the Republic of Uganda, the agreement on Implementation and Monitoring Mechanisms stipulate that during the Transitional Period of one month that shall commence upon the signing of the Final Peace Agreement, the Ugandan government shall urgently take the necessary steps to establish national mechanisms of accountability and reconciliation as provided for in the agreement and shall also request the United Nations Security Council to adopt a resolution under Chapter VII of the UN Charter, requesting the International Criminal Court (ICC) to defer all investigations and prosecutions against the leaders of the Lord’s Resistance Army.

As an obligation of the LRA/M, it shall observe the Permanent Ceasefire and its combatants shall fully assemble during the Transitional Period at Rikwangba Assembly Area within ten kilometers radius from the Rikwangba administrative headquarters.

The agreement also calls for establishment of a buffer-zone of ten kilometers around the Rikwangba Assembly Area while a full battalion of the SPLA forces shall be deployed to protect the Assembly Area and the buffer-zone.

“We have had sleepless nights, but we have now achieved peace,” Machar referred to the intensive and marathon peace talks that sometimes spent the whole day and night until five or six o’clock in the morning.

Speaking on the same occasion, the former President of Mozambique and Special Envoy of the United Nations Secretary General for LRA affected areas, Joaquim Chissano, said he was emotional to witness the last agreement signed between the two parties. Chissano commended what he described as the Government of Southern Sudan’s ‘skillful mediation and successful guidance’ to the two parties during these difficult negotiations.

He hailed President Museveni and LRA Chairman Joseph Kony for their peace assurances.

Chissano told the parties that the United Nations agencies and donor countries were ready to support the implementation of the Final Peace Agreement in northern Uganda.

The Minister of Internal Affairs in the Republic of Uganda and leader of the government delegation to the Juba peace talks, Dr. Ruhakana Rugunda, said northern Uganda which was being referred to as conflict-affected area because of the 21 years of war in the country, may now be referred to as rapidly developing area because of the peace agreement. He praised the successful mediation efforts of the Government of Southern Sudan, saying that this would not only benefit Uganda and Sudan but also the region as a whole.

Earlier, the leader of the LRA/M peace delegation, Dr. David Nyekorach Matsanga, described the agreement as one of the best negotiated peace agreements. Matsanga said his Chairman Joseph Kony accepted to stand trial in a Special Court in Uganda for any alleged serious crimes he committed during the war, but not in ICC.

The twenty-one years of war in northern Uganda resulted in the death of tens of thousands of people and displacement of nearly two million people to over two hundred Internally Displaced Persons (IDPs) camps across the region.

Ethiopian peacekeepers arrive to Darfur over the week end