March 14, 2008 (JUBA) — The Southern Sudan minister of regional cooperation discussed yesterday with an American rights group the function of southern Sudan government and independence of media. 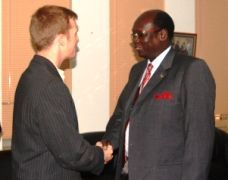 A delegation from the Humanity United independent organization headed by Peter Runlet the Director of Policy and Government Relations met with Hon. Dr. Barnaba Marial Benjamin the Minister of Regional Cooperation and discussed issues of governance, independent media and transparency issues in Southern Sudan.

The group aim to meet with a number of Government officials from the Government of Southern Sudan (GOSS) within their week long visit, before heading out to Yei and Rumbek.

Humanity United is an independent grant making organization committed to building a world where modern-day slavery and mass atrocities are no longer possible.

It also supports efforts that empower affected communities and address the root causes of conflict and modern-day slavery to build lasting peace.