A group of contact to implement Sudan Chad agreement

March 15, 2008 (DAKAR) — A contact group and a force to keep peace and security under the supervision of the UN and African countries will soon be set up to monitor and promote the implementation of the agreement signed Thursday in Dakar by Sudan and Chad in order to “normalize” relations. 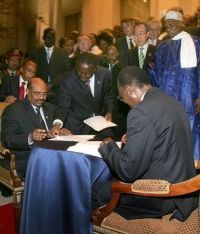 On Thursday February 13 evening, the Sudanese President Omer al-Bashir and his Chadian counterpart Idriss Deby Itno signed an agreement committing both of them to “put an end to the disputes” between them and to “normalize relations” between the two countries.

The agreement signed on the sidelines of the 11th summit of the Organization of the Islamic Conference (OIC) is the result of Senegalese mediation instigated by Paris which hopes that the EURFOR contributes to prevent rebels’ incursions along Sudan-Chad border and push the armed opposition groups to negotiate with their respective governments.

For the implementation of Dakar Agreement, N’Djamena and Khartoum agreed to “establish a contact group, which meets once a month in one of the capitals of member countries” that have sponsored this agreement namely, the Congo, Eritrea, Gabon, Libya and Senegal.

Will be members of this group of contact whose creation date is not indicated the foreign ministers of the above countries, “or any representative designated for this purpose”, said the final communiqué of the negotiations on the sidelines of the 11th summit of ‘Organization of the Islamic Conference (OIC).

Under the chairmanship of Libya and the Congo, “this group will be responsible for monitoring, the implementation in good faith of the agreement and its monitoring of possible violations” says the press release.

A peacekeeping force would also be set up to ensure stability on the border between the two countries. Khartoum and N’Djamena accuse each other of arming rebel groups to destabilize each other.

“The international community in general” is responsible for “setting up a peacekeeping force and to ensure safety and to observe the joint operations security of the common border” to the two neighboring states, said the text.

In addition to the above mentioned countries, the United Nations, the The Community of Sahel-Saharan States (CEN-SAD), the Economic Community of Central African States (ECCAS) and the African Union (AU) are responsible for taking all “necessary measures” to the establishment of the peacekeeping force.

The UN Secretary-General Ban Ki-moon, one of the OIC Ekmeleddin Ihsanoglu, President Omar Bongo of Gabon, representatives of the African Union (AU), European Union (EU), United States and of France participated in the negotiations.

Previous agreements to promote stability between the Sudan and Chad had been signed in February 2006 in Tripoli Libya and in May 2007in Riyadh Saudi Arabia.