March 18, 2008 (GENEVA) — Darfur envoys from the United Nations and the African Union underlined that rebel fragmentation remains the principle obstacle to hold peace talks with the Sudanese government. 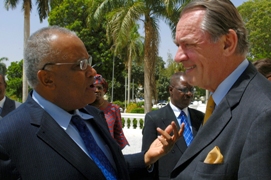 Jan Eliasson and Salim Ahmed Salim met in Geneva during tow days with regional partners from Chad, Eritrea, Egypt, Libya and international observers to discuss on how to further political progress in the strife-torn region.

Eliasson said he was working hard with Salim to include more rebel groups in any future peace talks. The failure to get all the major groups on board has prevented previous agreements from halting the violence in Darfur.

The UN envoy said consultations aimed at bringing all parties affected by the Darfur conflict into talks together. “We need of course to speed up this process,” he added.

Eliasson said there were many different splinter groups in Darfur, making the conflict “extremely difficult to resolve.”

The AU envoy said that “The only people who can make peace in Darfur are the people of Darfur themselves and the government,” Adding that “The international community can help, it can encourage, it can persuade, but it cannot impose peace.”

Eliasson acknowledged that they had some delay in their efforts to bring peace in Darfur. “We have gone through a negative period, but we hope we are now on to a new start.” But he added are determined to speed up contacts in the coming days.

“We hope that we will now take a new step toward peace,” Eliasson told reporters at the U.N. in Geneva.

However the current mediation is largely criticised by the main rebel groups. They are oppose to the current efforts of the UN-AU mediators to include splinter movements in the talks.

The leader of rebel JEM Khalil Ibrahim said two days ago that he prefers one-on-one talks with Sudanese government with Kofi Annan as mediator. While Abdelwhaid al-Nur the leader of the historical stream of the rebel SLM was always opposed to the inclusion of the breakaway factions.

The two groups claim to resume talks with the Abuja agreement, that they refused to sign, on the table and to discuss a supplementary document on the disputed issues.

However the mediators focused their efforts since the resumption of their initiative on the need to unify all the rebel groups before talks.

Sudan peace talks adjourn, due to resume in September