March 20, 2008 (NEW YORK) — Former U.N. Secretary General Kofi Annan dismissed suggestions on Thursday he might take on the job of mediating in the Darfur crisis in Sudan. 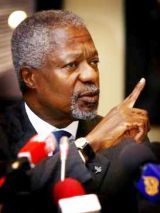 A Darfur rebel group, the Justice and Equality Movement (JEM), on Sunday demanded direct peace talks with the Sudanese government and said Annan should mediate.

Annan, who recently brokered an end to a crisis in Kenya, told reporters in New York part of the reason for his success there was having a single mediator speaking with one voice for the international community.

Asked whether he might get involved in Sudan, Annan said: “I think we have some very able people dealing with that and we should leave it with them.”

U.N. envoy Jan Eliasson and African Union envoy Salim Ahmed Salim are leading efforts to mediate between various rebel groups and the Khartoum government to end a war that began in 2003 when non-Arab rebels took up arms.

Annan said he had talked with Salim and Eliasson about the rebel group’s call for him to get involved, and advised the two mediators to carry on doing their jobs.

Salim and Eliasson had hoped to end the conflict with negotiations that started in the Libyan city of Sirte in October. But JEM and other prominent rebel bodies boycotted the talks and they fizzled out.

Eliasson and Salim have been trying to persuade rebel groups to arrange fresh negotiations ever since, but only a handful of factions have agreed.

Annan said the crisis raised doubts about whether the international community, through the United Nations, was living up to its “responsibility to protect” — a principle adopted by U.N. member states officially in 2005.

In a speech at a dinner later where he was accepting the MacArthur Award for International Justice from the MacArthur Foundation, which promotes human rights and justice, Annan said the world should have learned from the genocide in Rwanda and its failure to stop war crimes in the former Yugoslavia.

He said the responsibility to protect placed a heavy burden on the Security Council and its members.

“It is fair to question whether all of them have yet fully lived up to that responsibility, notably in Darfur,” he said, according to a text of the speech issued in advance.

International experts estimate some 200,000 people have died and 2.5 million have been forced from their homes in the five years of revolt in Darfur.

SLM-Nur suspends spokesperson on self determination call for Darfur