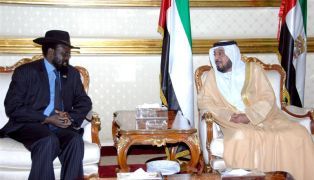 Speaking to the press following his arrival to Juba airport, Kiir said he was very satisfied with the outcome of talks held with high ranking officials in the UAE. He added that discussions were focused on the development of economic and trade ties between the two countries particularly southern Sudan.

Kiir asserted that Emirates’ officials and businessmen are expected to visit Juba in the near future to discuss investment projects in the region.

On his visit to the UAE Kiir said: “I came here to update the UAE leadership on the progress that we have made so far in implementing the Comprehensive Peace Agreement(CPA), which was signed in 2005. This visit is also part of our strategic commitment to cement the UAE-Sudanese relations, particularly in the areas of trade and investment”.

Kiir added: “I’m impressed by the UAE model of development. This is something that is worth emulating and I’m sure Southern Sudan will benefit from this model, particularly in the area of oil and petrochemical industries”.

Sudan and the UAE, he said, have had long and vibrant relations, dating back to the days of the late Sheikh Zayed bin Sultan Al Nahyan, who was the first Arab leader to visit Southern Sudan.