April 19, 2008 (KHARTOUM) — U.N. and African Union Peace envoys today announced the approval of all parties to the conflict in Darfur to start talks leading to stop the deterioration of the security situation before to engage in direct negotiations to achieve peace in Darfur 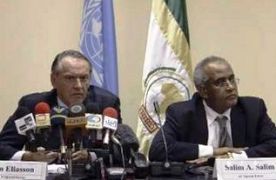 At the end of their fifth visit to Sudan, Jan Eliasson, the UN Secretary General envoy for Darfur and Salim Ahmed Salim, the African Union envoy to Darfur held on Saturday a press conference at the premises of the United Nations in Khartoum.

Salim Ahmed Salim said that Sudanese government and all the rebel movements in Darfur had expressed during the meetings that have taken place “their willingness to discuss the security arrangements.”

“But each one of them had his own position on how this can be brought about … Whether this could lead to a cessation of hostilities or to a ceasefire, this is the work that is being accomplished now.” Salim added.

Jan Eliasson, said that they will begin a process consisting of three elements 1 – How and ways of the ceasefire, 2 – Cooperation between the Government of Sudan and UNAMID and the rebel movements in Darfur 3 – Ways to stop attacks and banditry occurring in Darfur, which has impacted negatively on the security operation and the civilians in Darfur.

Banditry has long been common in the remote west of Sudan, which borders Chad, Libya and the Central African Republic, but armed bands have organised to take advantage of rich pickings from the influx of U.N. and aid agency vehicles since the rebellion began.

The conflict has claimed an estimated 200,000 lives with 2.5 million forced from their homes, according to the United Nations. Khartoum disputes the figures, saying 9,000 have been killed.

Eliasson expressed hope that the talks on security arrangements begin before this autumn. He further said it is not possible now to give the date where the parties will sit together, or discuss in any other form the security measures that may lead to a ceasefire or cessation of hostilities.

He added that various circles have now begun work on these arrangements in coordination with the UNAMID.

The underscored that the current efforts aim to quell violence in the region and clear the way for the resumption of peace talks before the end of the year.

Salim further told the media “we are not saying that all parties now prepared for a ceasefire to determine when it will take place; but we said that all the parties have expressed willingness — whether the Justice and Equality Movement, the Sudan Liberation Movement led by Abdel-Wahid al-Nur or the Government of Sudan — to discuss security arrangements.

They also welcomed the different offers to host peace talks including a proposal from UK Prime Minister Gordon Brown to hold peace talks in Britain.

The envoys pointed out that Brown didn’t consult them in advance.
However Britain accepted that their offer is going to be under the lead of the United Nations and the African Union, underlined Eliasson.

In May 2006, Sudanese government and a SLA faction led by Minni Minawi signed a peace deal and some small splinter groups. Nonetheless the peace pact did not change the level of violence in the region, and the security situation even deteriorated since the signing of the deal and the fragmentation among the two main rebel groups.

A joint African Union-United Nations peacekeeping mission took over in January from a beleaguered AU force to try to stem the violence. But it only has about 9,000 troops and police on the ground, out of a total of the authorized 26,000.

After spending around one year in attempts to reunite the different rebel factions in Darfur, the international community now seems convicted that no peace without security on the ground.

Sudan says no release of JEM POW’s without ceasefire

Sudanese president hopes next round of Darfur peace talks be final