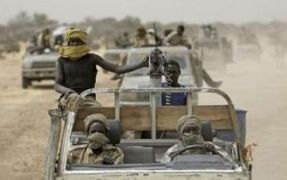 “JEM will not allow anybody to use its name in Darfur, let away drag it into banditry and disrepute. The Banda affair sends a strong message that unauthorised use of JEM’s name or logo will not be tolerated.” JEM militray spokesperson Ali Wafi said.

The rebel JEM urged the former members of movement to return to their mother organisation in line with the resolution of the JEM General Congress in October 2007 which decided to amnesty splinter groups.

During a meeting with UN and AU envoy for Darfur, JEM delegation pointed out that the proliferation of rebel movements threatening to become a problem in Darfur. JEM pledged “to address this chaos and protect civilians and international organisations by all means.” Said Ahmed Hussein Adam, JEM spokesperson.

In this regard, JEM told the two envoys last Saturday that they would not sit with the mediation in the presence of any other movement. It further advised saying “The best for the mediation to settle the issue with them before sitting with Justice and Equality Movement”.

However JEM underlined that it would not negotiate with the Sudanese government alone demanding the presence of an international mediation.