Turabi is a scapegoat to rebel aborted coup – Sudan FVP

May 12, 2008 (JUBA) – Reacting to the arrest of Sudanese Islamist opposition leader, The Fist Vice President said till yesterday there was no evidence against him adding that his arrest is a scapegoat to the foiled rebel coup in Khartoum. 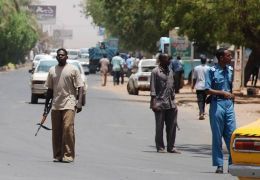 The first Vice President of the Republic and President of the government of Southern Sudan Salva Kiir Mayardit said the arrest of Popular Congress Party leader, Hassan al Turabi today in Khartoum at wee hours was not discussed by the presidency meeting of yesterday nor was there a security report that implicate Turabi with JEM attack of Saturday 10th May 2008 at 3pm.

He explained that the arrest of Turabi could only be a sacrificial lam towards JEM aborted coup, otherwise, there are no touchable charges brought against him by the national security during their meeting in Khartoum yesterday.

Salva Kiir however hailed the Sudan security and the regular forces for their patriotic and prompt action in repulsing the JEM invaders from the heart of the Sudan government.

Briefing members of SPLM Interim National Liberation Council at Home and Away Hotel today in Juba, Kiir said the Justice and Equality Movement forces that meant to hit the interior of Sudan central government in three fronts, presidential place, military headquarters and national Radio Omdurman but they were deceitfully confronted and repulsed by Sudan security combined with the organized forces.

He further said that Sudanese army came in after JEM forces were repulsed.

He called on both the NCP and SPLM to cooperate in order to repulse any aggression on the national capital with intention of capturing power through military means that will defiantly banned the CPA and the constitution of the Sudan.

President Kiir further disclosed that the attacking forces second in command man was killed along with many of there forces after they have caused heavy lost among Sudan security and organized forces during their heavy exchanged of shootout.

Kiir strongly condemned rebel JEM attack on Khartoum and said Darfur issue is of a political therefore have to be solving through peaceful dialogue.

President Kiir said SPLM was among the first political party in Sudan to condemn the Omdurman attack by JEM and on behalf of the government of Southern Sudan and SPLM political party extends condolences to the families of the victims of the attacks and wishes the wounded quick recovery.

Because of the gravity of the matter, the SPLM political bureau decided to postpone for twenty four hours the official opening of the its second national convention in Juba in order to enable the first Vice President attend to the threatening security situation in national capital.

A strong security network has been put in place to monitor and prevent such incidences to repeat it-self in the future, he said.