July 2, 2008 (OUAGADOUGOU) — The newly appointed joint UN and AU mediator for Darfur said on Wednesday he hoped to “strike a balance” in resolving the crisis in western Sudan. 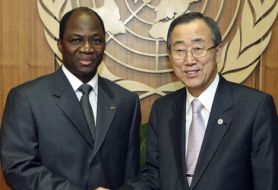 “Of course, we hope to strike a balance. As one often says in an exercise of this kind, no one can win everything, but neither should anyone have to accept losing everything,” Djibril Bassole told the state-run Burkina Faso daily Sidwaya the day after his nomination.

Bassole, who is Burkina Faso’s foreign minister, said in the same interview that he would first make contact with the various players in the crisis “to better understand” them and the situation and “identify the difficulties”.

He said his mission would only be complete once a total peace agreement had been reached.

The joint mediator will be based in the capital of North Darfur, El-Fasher, the headquarters of UNAMID, and will conduct his duties on a full-time basis.

Djibril Bassolé, 51, has a good experience in the field of conflict resolutions and peace mediations. He had played a key role to facilitate Ouagadougou Agreement of 2007 signed between President Laurent Gbagbo of Côte d’Ivoire and Forces Nouvelles leader (now Prime Minister) Guillaume Soro.

The UN says that up to 300 000 people have died and more than 2.2 million have fled their homes since the Darfur conflict broke out in February 2003. But, Sudanese government says 10 000 have been killed.