July 22, 2008 (EL FASHER) – The U.N. African Union peacekeeping force in Darfur denounced today a physical attack against a U.N. security officer in El-Fasher, the capital of the North Darfur state. 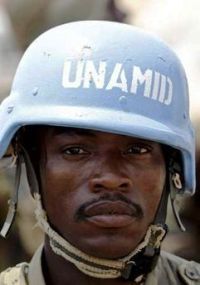 The peacekeeper was beaten by Sudanese military personal when he was taking pictures in the market where had occurred a road accident involving a UN staff , military vehicle and a taxi on the afternoon of 21 July 2008, the UNAMID said in a statement.

Noureddine Mezni, the spokesperson of the hybrid mission said the Sudanese troops forced the peacekeeper forced into a military vehicle before being taken to a Military base.

He further said that the UNAMID staff in the area tried to intervene to deliver the peacekeeper but in vain.

“UNAMID condemns in the strongest terms such attacks on its staff members, who are here to help bring peace to the people of Darfur.” Mezni said.

The UN security officer is presently undergoing treatment for injuries at a UNAMID hospital in El Fasher.

Seven months since the start of the mission, attacks against the hybrid mission are more and more conducted on regular basis.

Yesterday the head of the hybrid mission Rudolf Dada said they are determined to accomplish their operation in Darfur despite the recent attacks against the peacekeepers.