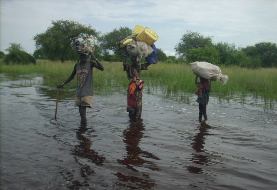 3,900 cattle have their grazing lands tapered to anthills and 1,470 gardens are destroyed, an administrator told a team of reporters Monday at Payam headquarters (16 miles north of Jonglei capital Bor).

Baidit Payam civil administrator Michael Jok says children, pregnant women and the elderly people suffered the most. “Health has generally declined these days and many children suffer diarrhea,” he said. 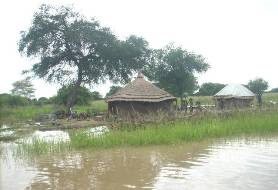 Some families were seen moving to higher neighborhood and children catch fish on road. Goats by the roadside climbed anthills and trees branches. A distance of 2 miles has been covered by water on road heading to Payam headquarters from Bor Town.

Acting commissioner of Bor County Deng Akuei Kur told a press briefing on Monday at Baidit that his government is unable to combat the situation. “I call upon the State government, the Government of Southern Sudan and the UN agencies to intervene,” he said.

Touring the Payam on Saturday, Governor Kuol Manyang encouraged the population to build hand-made-dykes as the State analyzes the situation for possible assistance.

How CIS Was Equipping Sudan with Arms