August 29, 2008 (BOR TOWN) – A team of European Union on Thursday says at least 350 millions US dollars will be invested by Holland, Turkey and Belgium governments for infrastructural development in Jonglei state. 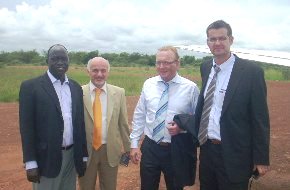 The delegates, Hamed Salah Hamed and Rob in’t Zand add, said at a press briefing in Bor airstrip Thursday, that the construction will be implemented by the European firm MZ Equipment.

The infrastructures to be targeted include roads, airstrip, hotels and residential. The EU delegate stressed that the state government will take a paramount role in the development.

According to the deal, the company will build houses and hotels and payment be made in installments.

The State chiefs took the EU staffs around the town for a brief tour before proceeding to Juba from Khartoum. Admiring the surveyed of the town and dry wealth roads designed here, the EU diplomats argued the State authorities to represent the cost of the projects in priorities and send (to them) immediately.

Jonglei government maintains that inaccessibility of many counties in the state instigates hostilities as government policies are not effectively spread. The EU funding may uplift the State major challenger- the poor roads.