September 4, 2008 (JUBA) — “Southern Sudan would have the most complex voting system in the whole world … where a voter would have twelve ballots to cast in the next year’s elections,” said today the Vice President of Government of Southern Sudan, Riek Machar Teny. 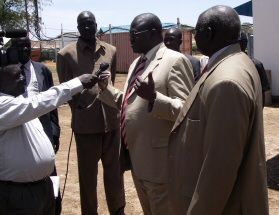 Sudan’s National Assembly passed electoral laws two months ago, paving the way for the mid-2009 general elections among which would include presidential and parliamentary elections at all levels of government.

The elections would be the first ever comprehensive exercise of this kind in the country since independence in 1956.

In this one-country-two-systems interim political environment brought about by the 2005 Comprehensive Peace Agreement (CPA), registered voters in the South would be required to vote for their Khartoum-based political leaders as well as their regional leaders based in the South.

Northern Sudan voters according to the electoral laws will cast ‘eight’ ballots in the elections.

The SPLM Chairperson Salva Kiir Mayardit is nominated by the Party to contest the highest post in the country against the incumbent President Omer Hassan al-Bashir.

Speaking to journalists on Thursday while inspecting the Southern Sudan Television (SSTV) new studio premises, Machar reiterated the need to accelerate the launch of the SSTV satellite channel which would be accessed country-wide as well as globally through the DSTV satellite channel 144.

He said there was urgent need to educate the citizens in the South through the media about this complex elections and the coming referendum. “We have a lot of activities to do … elections are coming, referendum is coming … we must educate our voters on these,” he further explained.

The Minister of Information and Broadcasting, Gabriel Changson Chang, who is also the official Spokesperson of the Government earlier reached a contractual agreement with the DSTV satellite carrier that would be costing millions of dollars of annual fees to the DSTV to carry SSTV programmes world-wide.

Trials of SSTV satellite broadcast carried by the DSTV satellite channel 144 seem to be successful as they could be received globally by those with DSTV facilities.

In the preparatory process to produce quality programmes, the Ministry has also trained more than 50 staff of Southern Sudan Radio (SSR) and Southern Sudan TV (SSTV) in South Africa and Kenya on radio and TV programmes.

The Juba-based Southern Sudan Radio was launched last year and has been covering the whole of Sudan.

Minister Chang has also embarked on implementing his Ministry’s plan to establish public TV centers in all counties of Southern Sudan where those who could not afford to buy TV sets could come to and watch SSTV programmes free of charge.

The CPA ended a 21 years of war on January 9, 2005 between North and South and called for mid term elections and referenda in the South and Abyei in 2011 in which the people of Southern Sudan would vote to either separate and create an independent nation or confirm the unity of the whole Sudan.

The disputed oil rich area of Abyei would also vote in a separate referendum to either join the South or remain with the North.

US policy in Somalia comes under fire in Congress

SPLM-IO says Taban Deng has no army to assemble