October 17, 2008 (KHARTOUM) — The Sudanese president Omer Hassan Al-Bashir asserted that there no prefixed resolution to pass through a consultations meeting he launched to end Darfur crisis. 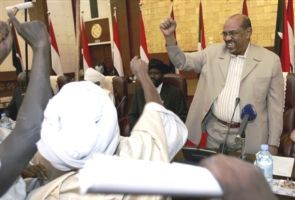 Al-Bashir called for a large consultations conference since last July in abide to create a national political platform to negotiate with rebel movements in western Sudan region of Darfur.

However the Sudan’s People Forum that he launched yesterday had been boycotted by two political parties and other organisations. Also suspicions were raised over the real intention of the ruling party from this meeting.

The Sudanese President stressed today there is no prefixed document to be approved by the forum. He added that constructive deliberations would lead to define the content of this document.

Al-Bashir told the meeting which is transferred from Khartoum to Kenana in the White Nile State that this consultation means also to bring home Darfur issue after the internationalisation of the crisis and the foreign interferences.

Senior Presidential Assistant Minni Minawi who quitted his presidential office in Khartoum and remained in Darfur during four months arrived yesterday to the capital to take part in the meeting. Today, He flew to Kenana where the conference is held up to the next Sunday.

He further renewed his call for all Sudanese political forces to join the consultative forum, he also expressed hope that it finds out options for addressing the Darfur issue.

Al-Bashir announced the formation of a panel to manage the works of the forum from the former Sudanese head of states and prime ministers such as Abdel-Rahman Ahmad Siwar Al-Dahab, Ahmed Al-Mirghani, Sadiq Al-Mahdi and Aljzuli Dafallah.

The spokesperson of the conference, Jalal Al-Dougair, told the reporters that the Forum will take into account the demands of Darfur rebels in order to bridge differences between the parties.

He further expressed hope that they would hold direct talks with the rebels in Doha soon.

In October 2007, UN-and AU-mediated talks on Darfur in the Libyan city of Sirte aimed at convincing key rebel leaders to join the peace talks quickly collapsed after the main rebel groups boycotted the event.

Bodies of revolution’s martyrs will not be buried before investigations: Sudan’s prosecution