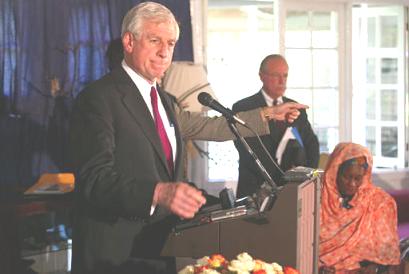 NAIVASHA, Kenya, March 19 (Reuters) – A U.S. envoy said on Friday he had tabled a fresh proposal on how to solve a dispute over an oil-rich area in Sudan in a bid to revive flagging talks aimed at ending two decades of civil war.

Under the U.S. proposal, the central oil-rich region of Abyei would be given special status once a peace deal is reached, meaning it would have its own executive and would belong to both the north and south.

The latest round of talks between Sudan’s First Vice President Ali Osman Taha and Sudan People’s Liberation Army (SPLA) rebel leader John Garang have been held by the Abyei dispute.

The U.S. proposal says the region’s oil revenues would be split 50-42 percent to Khartoum and the southern rebels respectively, with the remainder split between the tribes in the area.

“In general terms, we accept it but we are not fully satisfied with it,” SPLA’s spokesman, Yasir Orman said without elaborating.

The mainly Christian and animist rebels have waged war since 1983 against the Islamist government in the north of the giant oil-producing country for greater autonomy in the south.

Taha and Garang are under pressure from the international community to strike a deal soon, but this is the first time that the U.S. has made a specific proposal in the peace process.

Apart from Abyei, power-sharing is the final issue to be resolved before a much-delayed peace accord can be signed.

“Because Abyei has been such a contentious issue and there appears to be a stalemate…necessity has dictated a more explicit approach from the U.S.,” John Danforth, President Bush’s special envoy for peace in Sudan told a news conference.

“With respect to substance, there has been no real movement or no real meeting of the minds in the past two months,” he said at the talks’ venue in Naivasha town, northwest of Nairobi.

He was conveying Bush’s sentiments that the longer the process drags out the greater a possibility of a break down.

The proposal suggests international monitors would be deployed to ensure full implementation of the agreement, and at the end of a six-year interim period, Abyei residents would vote on whether to retain their special status or belong to the south.

Khartoum officials say they suspect the rebels are trying to annex Abyei in preparation for eventual secession from the north. Under an agreement reached earlier in the peace talks, southerners will vote in a referendum in six years’ time to decide the future of the south.

The SPLA and Khartoum are aware that Sudan could face sanctions if it receives a bad report from the State Department, which will submit a report to Congress on April 20 giving an assessment of whether the parties are negotiating in good faith as part of Washington’s Sudan Peace Act.