December 24, 2008 (WASHINGTON) — The two partners of the Comprehensive Peace Agreement will meet earlier next month in Washington to undertake an inventory of the CPA implementation. 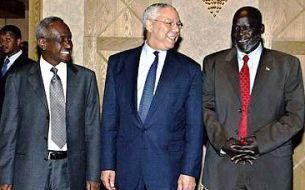 The United States has extended an invitation to the two signatories of the peace deal that ended more than tow decades of war in Sudan to evaluate its implementation four years after its signing on January 2005 in Nairobi.

The outgoing President Bush pushed by church and civil society groups played a key role in the success of Naivasha talks which lasted for more than two years.

Within three week, a new administration led by the President-elect Barack Obama will deal with the Sudanese file but with another priority: the resolution of Darfur conflict that Bush administration has failed to solve.

The southern Sudan government president Salva Kiir will arrive to Washington on January 3, to thank the President Bush for his efforts for realising peace in southern Sudan but also to draw the attention of the new administration to the need to back the implementation of the CPA.

While the National Congress Party, as it does not expect much from the new administration, will send a small delegation composed of Mustafa Osman Ismail and Yahya Hussein who is in charge with the CPA implementation at the Sudanese presidency.

The SPLM is expected to put on the table the border demarcation and the delay in the adoption of bills related to the democratic transition and the run of 2011 referendum. The Darfur crisis also will be among the debated issues.

Bush’s Special Envoy to Sudan, Richard Williamson, said last week that Washington is preparing a diplomatic platform for Obama’s administration to test with Sudan when he takes office in January.

Williamson underscored that these preparations would put the new administration “in a position to move to the robust steps immediately at such time as they may determine there won’t be progress diplomatically.”

However he predicted that elections will not take place in 2009, as mandated by the 2005 peace deal. He further said “I’ve never worked on a more discouraging project, and my first ambassadorship was 25 years ago. This is devilishly difficult.”

Also last Sunday in an interview on with the MSNBC TV, Condoleezza Rice regretted its failure to bring peace in Darfur. She said that the U.S. had not adequately exercised its diplomatic influence with other countries in order to pressure Khartoum: “I think we’ve done a lot unilaterally, but we could’ve done a lot more if the international community were better mobilized.”

Analysts agree that the new administration would more to try to honor its pledges towards Darfur crisis. Khartoum intransigence would push Ombama to take tough position based on Bush experience, they conclude particularly after the expected arrest warrant against President Bashir.