January 14, 2008 (KHARTOUM) — The Presidency of the Republic deliberated at a meeting held Wednesday evening on the progress on the implementation of the Comprehensive Peace Agreement (CPA) since 2005, and particularly the remaining bills before the general elections. 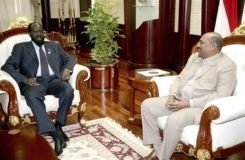 On December 30 after a turbulent day and tough negotiations, the two partners of the national unity government agreed to hold an emergency parliamentary session at the beginning of next February to pass laws related to the democratic transition and the 2011 referendum for southern Sudan.

The Sudan People’s Liberation Movement (SPLM) had called to extend the activities of the National Assembly until the revision of all the laws and accused the National Congress Party (NCP) of obstructing the CPA implementation.

The meeting discussed the progress made to adopt remaining bills related to the Press and Publications Act and the National Security Act. The presidency reviewed reports about the progress thus far by the political and the legislative committees in charge of the laws.

With regard to the law on the referendum, the presidency was informed about the deliberations at the level of the National Constitutional Revision Commission (NCRC), which will also hold national consultations with the political forces, before to draft a project that will be referred to the government to deposit it at the parliament.

The meeting was attended by the President Omer Al-Bashir and his two deputies Salva Kiir Mayadrit who is also the President of the Southern Sudan government and Ali Osman Taha. Also taking part in the meeting was Abdel Basset Sabdarat, the federal minister of justice, the two state ministers at the presidency, Lual Joseph and Idris Abdel-Kadir Mohamed, and southern Sudan minister of legal affairs and constitutional development, Michael Makuei.

The presidency also tackled the establishment of remaining commissions: the High Human Rights Commission, and the Office of the National Territory. The parliament last month adopted bills on the two institutions.

The meeting also approved the appointment of the chairman and members of the commission on the development and promotion of national languages.

The general elections are scheduled to be run before July 2009. Opposition parties say that freedom of expression and the press law are still constrained by other statutes that do not comply with the constitution.