Speaking at a function to officially launch the network in Southern Sudan on Saturday in Juba, the Chairman of Vivacell mobile network, Pierre Fattouch said the new network will usher in a new era of telecommunications in Southern Sudan. 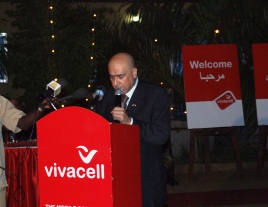 “Vivacell will augur a new era in Southern Sudan through the provision of the best services at the best rates and through the implementation of the state of the art network”, he said.

Fattouch said the new network can be accessed in Juba, Torit, Bor and yei, adding that the company is already working on an expansion program that will ensure the network covers the whole of Southern Sudan. “Vivacell coverage will expand to cover all the populated areas of Southern Sudan and should expand to cover all Sudanese territory like all other operators in Sudan to ensure fair competition”, he added. Vivacell current network capacity can host up to 1 million subscribers.

He said the mobile network will create more than 5 thousand job opportunities as well as providing extensive training programs for Southern Sudanese in order to strengthen human resources development in the region. “Vivacell will contribute effectively to the development of the local human resources through training and transfer of knowledge and expertise. We will build a Sudanese company based on Sudanese manpower and expertise providing to Sudanese customers the services they are looking for”, he emphasized.

Changson, who is also the GOSS Minister of Information and Broadcasting, added that the Ministry of Telecommunications is regulating the allocation of network frequencies in order to avoid rampant network interruptions that are associated with many mobile networks in Sudan. He also called on the mobile networks in Southern Sudan to improve their services to meet the expectations of their networks users.

Last April, Zain launched a GSM network in Southern Sudan, having deployed 50 base stations in the main urban areas. The company plans to spend US$150 million over the next few years on its network, which is predominantly covering the northern Sudan.

May 17, 2021 (PARIS) – An advocacy group has warned of the continuing threat to a successful civilian-led transition from the economic and institutional...

May 6, 2021 (JUBA) – Officials from South Sudan and Turkey have agreed to bring together business communities and development agencies from the two...
Advertisment