March 2, 2009 (WASHINGTON) –- The chairman and ranking member of the Subcommittee on African Affairs in the United States Senate sent a joint letter to President Barack Obama last week urging him to appoint a new envoy to Sudan and to expedite the policy review process ongoing at the State Department. 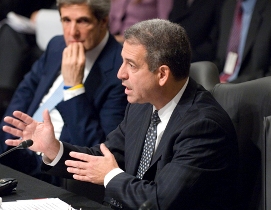 Sent from Senator Russell Feingold and Senator Johnny Isakson and dated February 25, the letter was also copied to the Secretary of State and the US Permanent Representative to the United Nations, Sudan Tribune has learnt.

“As you well know, the security situation in Sudan remains very volatile and has the potential to deteriorate in the coming weeks. At the same time, the new peace talks in Doha, Qatar, appear to be moving in the right direction and may provide an opening for greater engagement. We believe it is critical that the United States respond to these new developments, and that appointing a high-profile Special Envoy is an essential part of that process,” stated the letter.

The previous envoy, Ambassador Richard Williamson, served from January 7, 2008 until Obama took office. The proposed new envoy would have a similar mandate, but activist groups have further recommended assigning two senior diplomats to the appointee, one tasked with focusing on Darfur and the other with focusing on the Comprehensive Peace Agreement.

Currently, the leading White House figure known to be taking part in the review process for Sudan policy is Samantha Power, a professor who served as an advisor to Obama while he was in the Senate. No details have emerged from the administration about any change of course or how the administration would respond to potential developments in the Sudan, where the nation’s president possibly will be indicted by the International Criminal Court this Wednesday.

“It is our understanding that your administration has been undertaking a policy review process to ensure the most effective strategy toward all of Sudan, and we commend you on that careful planning. However, in light of changing events on the ground, we urge you to expedite that process as much as possible,” said Feingold and Isakson.

The senators then added, “We are ready to work with and support your administration in that effort.”

Also remarking on the policy review, the top U.S. diplomat in Sudan, Charge d’Affaires Alberto Fernandez, today told the official SUNA that the new US administration is reviewing Sudan policy but is not yet prepared to recommend an envoy. Asked whether Washington will appoint soon a special envoy to Sudan, Fernandez said “the Sudan policy review has not yet reached a level where it can issue any recommendations or decisions on this matter.”

Sudan ended one civil war in 2005 and a separate uprising in Darfur against the government is entering its sixth year. During the course of this conflict, the US Congress labeled the government’s counterinsurgency operations genocidal, a charge now also leveled by the world court in The Hague.

US, at UN, urges aid to spur peace in Sudan – Washington Post