March 7, 2009 (KHARTOUM) – Some southern Sudanese rallied today in the Sudanese capital to show their support to the President Omer Al-Bashir after an arrest warrant made by the ICC judges against him. 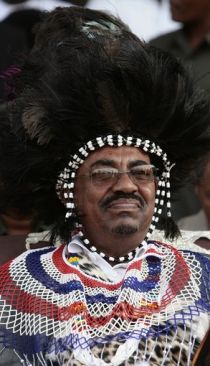 Different southern Sudanese political and tribal leaders were present at the rally and expressed worry that indicting Al-Bashir would endanger the Comprehensive Peace Agreement.

During his speech the President, who wore a traditional feathered headdress and colorful beads from southern Sudan, defied the International Criminal Court and associated it with Western countries.

Bashir told the gathering that the West is not qualified to speak about justice and human rights. He further attacked the United States which is not a state party to the court, describing it as the country of slavery and where the Red Indians were massacred. He further said that Washington committed atrocities in Vietnam and bombed Japanese towns with atomic bombs.

He also said that Sudan’s enemies want to demolish peace and stability. The Sudanese President said that there would be no return to war and pledged to develop the southern Sudan saying they are working in the implementation of the necessary infrastructure, roads and electricity, in order to launch important development projects there.

The Sudanese president also hailed the stance of the southerners and their support against the ICC. He said Sudan should remain united after the 2011 referendum on secession, as had been decided by southerners in 1947 at the Juba Conference, because if the South decides to separate it would destabilize the whole continent.

Bashir also spoke about the 13 aid groups that he just expelled from Darfur describing them as “thieves” and accused them of keeping the most important part of the aid.

“The media report that 2 billion dollars had been spent in Darfur aid operations; but when we revised these figures we found that what reached Darfur effectively is less than one hundred million. Actually they took more than 99.9%,” he said.