May 11, 2009 (EL-FASHER) – The Sudan Armed Forces clashed with a previously allied militia in the state capital of North Darfur on Sunday, the UN-African Union hybrid peacekeeping operation in Darfur reported today. 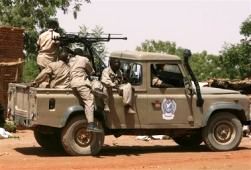 Sporadic shooting in El Fasher’s main market were the result of hostilities between the Sudanese military and the Central Reserve Force. There were reports of fatalities during the clashes.

The army has been hunting militiamen accused of killing one of its soldiers. According to the independent Radio Dabanga shortwave, on Sunday there was an exchange of gunfire as soldiers were hunting inside town, wounding at least four people.

Yesterday the Sudan Tribune reported that soured relations between the Sudanese army and a local militia called Border Intelligence Division prompted a visit Sunday by the Minister of Defense Abdel-Rahim Ahmed Hussein.

Two members of the militia had been killed by the Sudanese army after refusing to be disarmed on Friday. On Saturday they then attacked the army and killed two soldiers to revenge the deaths Friday.

Then on Sunday panic broke out amongst the worshippers in the Mosques of Goba, Ziyadiyah, Diem Selk and Nasser. But eventually the militia withdrew from the northern and eastern parts of El Fasher town and calm returned today, reported Radio Dabanga.

Two men were later arrested by the government for involvement in the market shootings, said the peacekeeping mission, known as UNAMID, which dispatched an investigation patrol to the market area to speak with locals about the situation.

In a press statement, the Mission assessed that the security situation in some parts of North Darfur has been “relatively tense” during the last three days.

Though the UN-African Union Mission continues to conduct scores of daily “confidence-building patrols,” escorts and night patrols in and around refugee camps, its own personnel is increasingly targeted.

“A surge of banditry activities targeting UN personnel in North Darfur were recorded and carjacking incidents were reported in both North and South Darfur,” stated the UNAMID daily media brief.

Moreover, there has been an increase in burglaries targeting UNAMID staff accommodation. Three cases were recorded last week in which staff members’ houses were broken into and their valuables and personal effects, including cash, were taken away, peacekeepers acknowledged.