May 19, 2009 (KHARTOUM) – The Sudanese First Vice President Salva Kiir and the president of semi-autonomous South Sudan said he is unhappy with the results of the census conducted last year and called for it to be excluded from wealth and power sharing formulas. 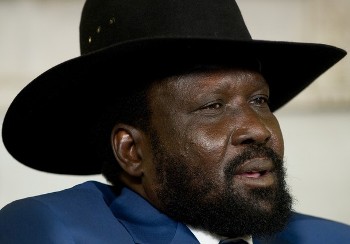 Kiir speaking to the Southern Sudan Sultans conference in Bentiu the capital of Unity State said he is “unhappy and unsatisfied with the census results”.

The fifth Sudan Population and Housing Census, conducted from April 22 to May 6, 2008 is considered crucial in the implementation of the 2005 Comprehensive Peace Agreement (CPA).

The census will help decide how wealth and power are ought to be shared in Sudan.

But the SPLM chairman called not to link the census results to the elections and not to use it for wealth and power sharing. He also urged to revert back to the old constituency system in the elections to avoid controversy.

The census results are due to be released next Thursday but unofficial results show that the population of Khartoum topped 5 million; Darfur 7.5 million and South Sudan 8.2 million.

Furthermore, the number of displaced Southerners in North Sudan has been reported as 500,000 which has been deemed as understated by Southern officials according to the report.

Kiir ruled out any return to war adding that any further dispute would be to implement the CPA but accused unspecified parties of seeking the demise of the peace agreement.

On the elections the First Vice president said that the security situation in the South prevent the conducting of elections in February 2010 but expressed confidence that they can resolve the conflicts that erupt toward the election and referendum dates.

He called on the Sultans to ensure the disarmament of citizens saying again that some parties want to the South to appear “failed” by undermining stability and security.

Kiir said he is determined to “refute lies and rumors” through development and services.

The National Congress Party (NCP) official Ibrahim Ghandour responded quickly to Kiir saying that the election law has determined that constituencies will be based on population.

He further said that the census in the South was conducted by Southerners themselves adding that any complaints on census should be based “convincing reasons” not political ones.

The SPLM chairman also acknowledged financial difficulties and urged to pursue other sources of revenue.

Southern officials have warned that drop in oil revenue proceeds shared with the North is posing real threat to stability of the region socially and economically.