Sudanese army takes back another town near Chad border

May 28, 2009 (KHARTOUM) — Sudan Armed Forces on Thursday has taken back control of Kornoi, a town near Chadian border that fell into Darfur rebels hands two weeks ago. 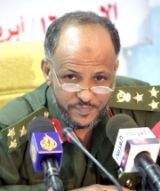 Sudanese troops have complete control over the town of Kornoi, said the army spokesperson Osman Al-Agbash who added that fighters of the rebel Justice and Equality Movement had evacuated the town.

The move comes after heavy bombing by army warplanes on the rebel positions in the area.

JEM leader Khalil Ibrahim on May 17 said his troops controlled Kornoi which lies on a key road leading southeast toward the North Darfur capital. “We want to clear them out of the area,” he added.

The rebel group launched another attack on another neighboring town, Um Baru located at 50 kilometers east to Kornoi on May 24. However after fierce fighting the army repelled the rebel assault.

Following three air raids by Chadian army against its rebels inside the Sudanese territory Sudan massed troops and military aircrafts in the region and warned Ndjamena it would not tolerate further incursions.

Darfur peacekeeping force condemned the attacks and urged the warring parties to work towards a cessation of hostilities through the Doha process.

SAF spokesperson emphasized that the armed forces continue to clear the suspected areas in Darfur from presence of JEM rebels.

Sudanese government and JEM started yesterday a new round of talks in the Qatari capital over the implementation of a goodwill agreement they signed last February.

The Grave situation in Darfur is undisputable, Beshir

Too many UN resolutions on Darfur too little action