JULY 21, 2009 (ABYEI) – The United Nations Mission in Sudan’s chief of post in Abyei today said parties to the peace agreement must abide by tomorrow’s court ruling. 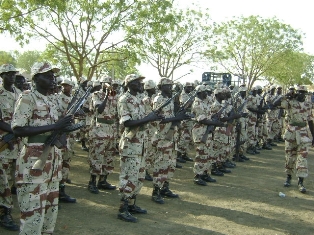 The National Congress Party and Sudan People’s Liberation Movement agreed last year to accept as final and binding a ruling by an arbitral tribunal of the Permanent Court of Arbitration (PCA) in The Hague.

Speaking to journalists at UNMIS camp this evening, Mr. Mark Rutgers, UNMIS Head of Office in Abyei, said Wednesday’s decision in The Hague on the Abyei boundary line between north and south Sudan is a test for peace in the region.

Abyei experienced nearly complete destruction that was wrought from fighting between northern and southern Sudanese forces in May 2008, when over 50,000 people fled.

On Tuesday, Mr. Rutgers just returned from a four-hour visit to the village of Difra where he held a meeting with traditional leaders, and representatives of women and youth. He highlighted that the village is one to which families have recently voluntarily returned.

At a press briefing in Abyei after returned, Mr. Rutgers said he traveled to the north of Abyei town, located close to the contested border areas to listen and gather first-hand information and experiences of those who have returned.

“My visit was to meet with traditional leaders and other community leaders, including youth and women’s representatives, to hear their concerns, as well as staff members from UN agencies and the UN peacekeeping mission there,” he said.

The new Head of Office, who is replacing Chris Johnson, noted that it was apparent that life in Difra is returning to normal, given the farming activities undertaken by the returnees. He said it was clear that UNMIS quick impact projects in the village were already benefiting the returnees, with the latest project involving the rehabilitation of the school.

However, he said that a few people he met in Difra expressed fears about the potential for renewed conflict if the parties do not accept the tribunal’s decision. Difra was home to 8,000 families until May 2008, when the fighting forced residents to flee further north to camps in Muglad.

Despite rumors that more conflict could occur in the area after the announcement of court ruling on Wednesday, many residents started returning three months ago after local Sudanese government officials promised better security and began allowing humanitarian agencies to offer plastic sheeting and other materials for the rebuilding of homes.

Mr. Rutgers also met in Difra with the local councilor on the Abyei council, Kabashi Tom, to discuss issues including security and the proliferation of arms in the area.