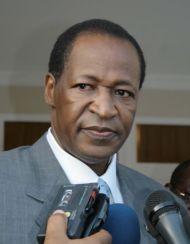 The visit is part of the distinguished relations between the two countries and tends to coordinate between the two sides in the issues of mutual concern,” said Haydar Hassan Haj Al-Sidiq, head of the Protocol Department at the Foreign Ministry.

In a joint press conference held between the two presidents, Al Bashir said the visit comes within the framework of regional and international efforts being made by Compaore to contribute to resolving the Darfur issue. He further referred to his role in achieving reconciliation in Ivory Coast and Guinea

The Sudanese President further expressed appreciation for the attention paid by Compaore to achieve peace and security in Africa in general and Sudan and West Africa in particular. Bashir said Compaore’s interest to resolve Darfur conflict is represented in the fact that he pushed to appoint his former foreign minister Mr. Djibril Bassole to be the Joint Mediator of the United Nations and the African Union to resolve Darfur conflict.

Al-Bashir and Compaoreare held closed-door meeting Friday in Khartoum on the political and economic relations between the two countries, the Darfur issue and the CPA implementation.

Sudan’s foreign ministry stressed the role of Burkina Faso as one of the Francophone countries in the African continent that maintains good relations with France. Al-Sidiq, said “we work to utilize this characteristic to send messages to France concerning our position toward all the current political issues.”

Outcome of Darfur referendum will be implemented in the whole Sudan: official