January 7, 2009 (LONDON) — A group of aid agencies issued a joint report today that urged the UN Security Council to consider whether the United Nations Mission in Sudan (UNMIS) needs more resources, pointing out that civilians in South Sudan are at risk, particularly in rural areas. 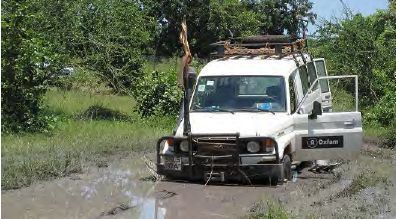 In 2009, approximately 2,500 people were killed in violence in South Sudan and more than 369,000 fled their homes, according to non-governmental organizations.

“The UN Security Council (UNSC) should emphasize that protecting civilians must be a priority for UNMIS and consider whether UNMIS needs more resources to meet its mandated obligations,” states the NGOs’ Joint Briefing Paper issued today.

UNMIS was established by a Security Council Resolution of March 24, 2005, and reached close to its full-strength deployment by September 2006. The mission was tasked with monitoring the 2005 Comprehensive Peace Agreement, but it also had a Chapter VII (of the UN Charter) mandate to protect civilians.

In a strongly worded section of today’s Briefing Paper, the aid agencies claim that “For most of the mission’s life … the UN Security Council has not prioritised protecting civilians in southern Sudan; the UN Department of Peace Keeping Operations (DPKO) has not provided enough support for protection activities; and the UNMIS in-country leadership has neglected civilian protection.

“There are several reasons for this: southern Sudan’s precarious security environment was not well understood; UNMIS was concentrating on CPA monitoring; and a view existed among mission personnel that the Security Council added the civilian protection component to the mandate as an afterthought. As a result, UNMIS has been slow to grapple with its mandated protection responsibilities and to use its resources to respond to a changing context.”

Maya Mailer, a writer based in Juba, co-authored the Joint NGO Briefing Paper. She said in a press statement, “It is not yet too late to avert disaster, but the next 12 months are a crossroads for Africa’s largest country.”

The report happened to be published on the day the UN announced that at least 139 people were killed in a remote part of Warrap state sometime in the past week.

Violence in rural areas has included inter-tribal fighting and community-level feuding. But other problems are of a different nature, such as the Lord’s Resistance Army’s (LRA) presence in Western Equatoria. Voluntary youth militia known as ‘Arrow Boys’ have responded to this threat.

The recruitment of ‘Arrow Boys,’ the paper argues, is not an adequate response: “the reliance on a militia, which includes children among its ranks, is extremely worrying and is a sign of the inability of the GoSS security forces and the UN peacekeeping mission (UNMIS) to protect civilians.”

Again a response from the UN Security Council is urged: “The LRA is a regional problem, however, requiring a regional response, and neither the GoSS nor UNMIS can be expected to deal with the LRA on their own. The UN Security Council must renew its engagement with the LRA issue and push for a comprehensive solution to the problem. At the same time, as detailed below, the GoSS and UNMIS can and must take urgent steps to improve the security of citizens, including in LRA-affected areas,” it says.

Other insights deal with development and enhancing capacity to respond to emergencies. The briefing paper also calls for improvements to airstrips and roads, through donor funding, which would “enable the authorities and UNMIS to reach unstable locations quickly.”

“Rescuing the Peace in Southern Sudan” is the title of the report, which was written on behalf of the following organizations: Cordaid, Save the Children, Tearfund, Oxfam International, World Vision, Christian Aid, International Rescue Committee, Secours Catholique/Caritas France, ICCO & Kerk in Actie, and Handicap International.

16 Misseriaya are killed in latest clashes with south Sudan army

Sudan to raise oil productivity to 500 barrels a day

U.S. embassy in Sudan urges Americans to be more vigilant