Save Darfur President Jerry Fowler to step down

February 3, 2010 (WASHINGTON) – Jerry Fowler, the leader of an advocacy coalition that made the remote Darfur region a familiar name in Washington political circles, will step down from his position on March 12. 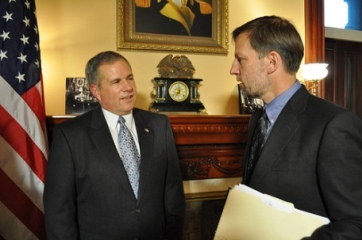 Mr. Fowler was the founding director of the U.S. Holocaust Memorial Museum’s Committee on Conscience prior to co-founding the Save Darfur Coalition in 2004. He served on the coalition’s board of directors and assumed the position of president on February 4, 2008.

Save Darfur is affiliated with about 190 civil society groups in the United States. The headquarters staff, based in the downtown Washington, D.C., engage in lobbying, advocacy, media outreach and education.

The outgoing leader has accepted a position with another major human rights nongovernmental organization — not yet announced — to work on related issues. Politico, a newspaper specializing in Washington politics, last week cited anonymous sources saying that “constant infighting within the Darfur activist community might have been wearying,” prompting the president to step down. In an interview with Sudan Tribune, Mr. Fowler gave other reasons for his departure. He expects to continue to work informally with Save Darfur.

“Nobody should think that I’m leaving because I think it’s time to hang it up,” he said. He said that the Obama Administration has failed to make clear what its benchmarks are in its Sudan policy – a reference to a supposed ‘classified annex’ to the strategy announced at the State Department in October 2009. He also said he is “concerned that there is confusion inside the Administration about what the benchmarks are.”

Mr. Fowler said he thinks the advocacy movement has achieved a lot. Explaining efforts since the campaign season when Barack Obama was elected president, he said “a key focus has been making sure Sudan is on the agenda of the new Administration and trying to keep it as high on the agenda as possible, in what is obviously a very challenging environment because of a lot of other issues.

“I think in general it’s because of the work of advocacy groups like Save Darfur and our partners that this has gotten the attention that it has. Obviously, we would like more and higher level attention, especially by the President, but the effects of the advocacy I think are clear,” he said.

Mark Lotwis, formerly the Coalition’s Senior Director of Campaign Advocacy, will take over as acting president. Mr. Lotwis has served as a Democratic political operative.

Both the outgoing coalition president and his successor have been granted visas to visit Sudan and will travel to the region in February ahead of Sudan’s April 11 presidential election.