February 28, 2010 (KHARTOUM) — Dr. Mansour Khalid, a senior member of the Sudan People’s Liberation Movement and Advisor to the President in the Government of National Unity narrowly escaped in a near-miss plane crash at Khartoum International Airport on Friday, February 26. The plane had a bad landing but managed to avoid destruction. 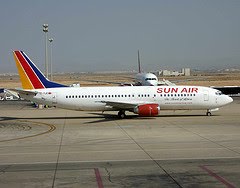 The official, who was returning to the national capital after an official visit to the regional capital of Juba, was on board with other national figures like Khartoum University law professor Akolda Mading Tier, who also serves as member of the National Election Commission.

In an interview in Khartoum city centre, Professor Akolda said they survived an accident as the Sun-Air Boeing 737 was about to land and another plane was taking off. The pilot was quick to pull up so as to avoid colliding with the plane that was taking off and quickly lunged downwards to resume the aborted landing. As a result, the aircraft’s front underway carriage hit the ground before the back carriage. The pilot struggled to control the aircraft until it came to stop.

All the passengers including him, said Professor Akolda, were shocked and too scared to talk to one another when the pilot was struggling to avoid the crash. “We did not know what went wrong between the pilot and civil aviation authorities at the airport until later on Saturday that we were able to learn that the pilot of Sun-Air Boeing 737 was instructed by the aviation control to delay landing for 10 minutes in order to allow another aircraft take off on the same runway.”

But, according to him, he said the pilot landed in defiance leading to narrowly escaping mid-air collision with the aircraft taking off. Instead of aborting the landing, the pilot resumed landing in the middle runway, almost loosing control.

This information was also reported by a Sudan Tribune contributor, John A. Akec, who had a contact on board. Mr. Akec’s commentary piece on aviation safety is due to be published in Sudan Tribune tomorrow.

By the pilot’s actions, the aircraft and passengers where exposed to a double risk, said Mr. Akech, assistant professor at Juba University who was at Juba International airport to see off his colleague from Juba on Friday.

A number of deadly accidents have occurred in recent years, including one on July 8, 2003, when Sudan Airways Flight 139 (Boeing 737-200) crashed in Port Sudan — with exception of a 2-year old, all 117 passengers on board died.

On June 10, 2008 Sudan Airways Flight 109 (Airbus A310-324) crashed during landing in Khartoum International Airport. About 30 passengers died and 178 survived. It was on its way from Amman in Jordan. Bad weather was blamed. There were numerous accidents involving crash of cargo planes in 2008 that lead to dismissal of director of Aviation in Khartoum International Airport by presidential decree.

Beijing’s Great Game – Don’t expect China to be ethical on oil – until the US is.