May 7, 2010 (WUNROK) — Former SPLA Deputy Chief of General Staff, Lieutenant General George Athor Deng, today, said his troops fought again with the southern Sudan army and vowed to hit back if his forces are attacked. 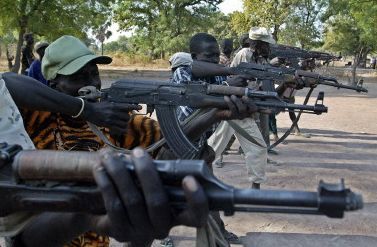 Today’s statements mark a new escalation in the tension between the former Independent candidate for Jonglei Governor and southern Sudan government in Juba.

Following accusation of attack on a SPLA base in Doleib Hills area on April 30, Athor said his partisans in the army refused to arrest him and mutinied against orders from Juba. He however rejected calls to move to Juba asking amnesty to his followers and removal of Jonglei elect governor.

In a telephone interview the renegade general disclosed failure of talks with the President of southern Sudan government and said his troops Saturday clashed with the SPLA troops deployed in the area and alleged killing over 50 soldiers.

General Athor said his forces clashed with SPLA forces at Golliet, 12 miles from Khorfulus. “Our troops met SPLA forces yesterday (Thursday) and exchanged fire at the reconnaissance site. The SPLA forces saw them and quickly started opening firing on our troops,” he said, adding that they are missing three soldiers.

“I have a report that three of our soldiers have gone missing. We do not know whether they are dead or alive because they did not return with their colleagues,” he said stressing he cannot confirm their death because their bodies have not been discovered.

“I cannot confirm their death because we are still looking for them. They might still be alive,” Athor said revealing that he has reports that more than fifty bodies allegedly members of SPLA have were discovered by his forces.

“Our troops after exchanging fire with SPLA forces reported that they were able to get more dead bodies on the side where forces loyal to the SPLA retreated,” he said.

“The information I have received does not mention death casualties. It shows that we have only one soldier injured on our side when they exchanged fire with forces loyal to General Athor,” said Colonel Malaak Ayuen Ajok.

Asked whether SPLA forces had planned to attack forces loyal to General Athor, Malaak said, the soldiers met a reconnaissance unit sent by Athor but they had no intention to attack them.

“They just met and exchanged fire at reconnaissance site,” he said emphasizing that SPLA forces do not have any orders to attack Athor.

The defeated candidate General George Athor also said had been involved in direct telephone conversations with SPLA commander in chief, president of the government of Southern Sudan, Salva Kiir Mayardit, but he affirmed they failed to reach any agreement.

“I have thrice talked to President Kiir but our discussions did not reach any understanding,” he said. He further said “Because we did not reach an understanding in the past, I decided that we cannot talk to him any more until he is prepared and ready for negotiations”.

“We will not attack and do not have plan to attack any SPLA base but will fight back in case of any new assault on our positions,” General Athor Deng told Sudan Tribune from Jonglei declining to comment on his whereabouts in the area.

Asked to confirm his defection from the SPLA, a matter that he had denied previously, Athor said he did not defect and has no plan to rebel against southern Soudan government. However he added that he was surprised by the bad interpretation of his presence in Khorfoulos after election loss.

After announcement of the results of gubernatorial election in Jonglei state, Gen. Athor left Bor to his ancestral village of Rut in Khorfoulos without congratulating the elected Governor Kuol Manyang Juuk.

“But their attempts to arrest me met resistances and subsequently saw departure of those they wanted to send going to their homes because they did not want to be part of the plot, he explained adding these people who refused to execute orders to arrest him are now the forces resisting attempts to get them.

“They are the ones that are said to be my forces and of course they are because I cannot run away from them because they are my people,” Athor said

Athor refusal to leave his troops comes after a call to go to Juba by another high ranking SPLA General who also had contested for gubernatorial position in Northern Bahr el Ghazal State, General Dau Aturjong Nyuol.

“His presence in the area is being misused. I suggest him to leave for the moment regardless of family and relatives matters he would like to attend. He should leave,” said General Dau.

On Friday 30, April 2010, officials from southern army and cabinet members in the regional government of southern Sudan, during a weekly cabinet meeting in Juba, accused openly General Athor of an attack on SPLA base at Doleib hills, 12 kilometers south west of Malakal Town, Capital of Upper Nile State.

5 arrested in connection with attacks in eastern Ethiopia